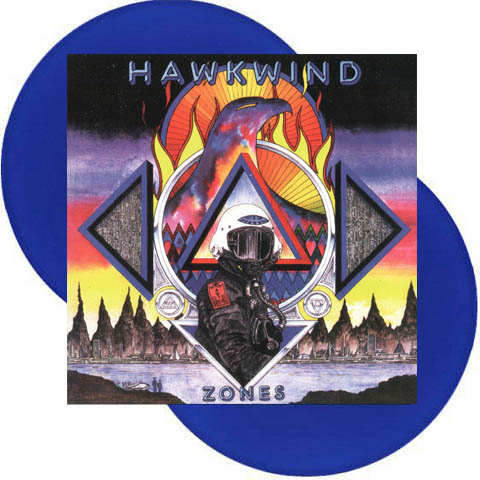 Frequently dismissed as just another ragbag gathering of live cuts and outtakes, Zones is, in fact, one of Hawkwind’s more fascinating albums, featuring cuts orginally scheduled for a follow-up to 1980’s mighty Levitation album, and catching them, too, at the tail end of the legendary Ginger Baker’s brief stint with the group. Recorded in December 1980, three studio tracks date from the Baker years, the brief electrobabble of Zones, Dangerous Vision and Running Through The Back Brain. None of them exactly tax the old master, although the deeply synthipopped latter makes some intriguingly funky demands. But two tracks recorded live at Lewisham Odeon during the band’s December 1980 U.K. tour offer a stronger indication of Baker’s strengths (the remainder of the show can be found on the This Is Hawkwind, Do Not Panic collection): the dramatic atmospherics of The Island and an excellent cruise through Motorway City. The soul of the album, however, lies in five tracks recorded two years later, with Martin Griffin now in the drumseat, and past collaborator Michael Moorcock returning to lead the band through a positively brutal Sonic Attack. Never regarded as one of Hawkwind’s brightest patches, these excerpts from an October 1982 concert at Bristol’s Colston Hall go some way toward rehabilitating its reputation and suffer more from less-than-perfect sound (and a somewhat dreary churn through Brainstorm) than anything else. Newer material — Utopia 84 and Dream Worker from the newly released Choose Your Masques — is of considerably higher value.