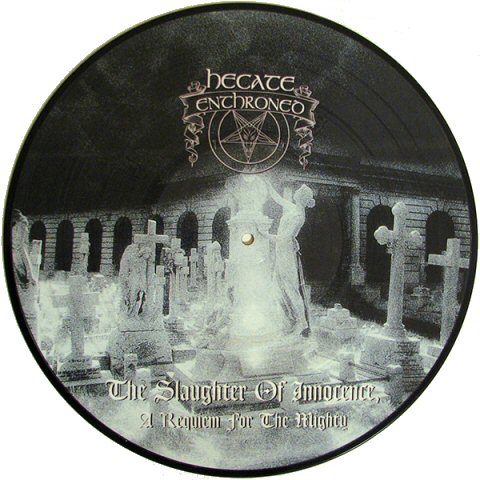 The origins of the British death metal band Hecate Enthroned date back to mid-1993, when vocalist Jon and guitarist Marc and Nigel first teamed in the group Daemonium; after a year of touring Jon left the line-up to join Cradle of Filth, but the remaining members soldiered on with a variety of new recruits. Rechristened Hecate Enthroned, the group welcomed Jon back to the fold during the spring of 1995, soon cutting a demo titled An Ode For A Haunted Wood which was subsequently remixed and issued commercially as 1996’s Promeathean Shores, Unscriptured Waters. The additions of keyboardist Michael, bassist Paul and drummer Craig solidified Hecate Enthroned’s sound, and in 1997 they returned with the first full length album The Slaughter Of Innocence. Hecates music has typical black metal blast beats, nothing very new in the drumming. Guitar riffs are simple but they use this simplicity to its fullest and it gets their point out in creating atmosphere. You won’t be listening to any shredding here, but you will definitely be headbanging along with this because its so simple but yet so beautiful and catchy. Keyboards, again are simple, there aren’t any Sonata Arctica keyboard solos, Dimmu borgir In Death’s Embrace style, or Limbonic Art’s technical keyboarding. Vocals, I sometimes think it’s Dani Filth but when you hear their screeches, it’s much different, Dani Filth’s is very very high pitched, Jon’s is high pitched but not to the point where it sounds like a girl screaming, you still hear some Testosterone in them. Not only that but Jon throws in a couple of nice growls here and there, adding to the variation.

Track listing:
1. Goetia
2. Beneath A December Twilight
3. The Spell Of The Winter Forest
4. Aflame In The Halls Of Blasphemy
5. A Monument For Eternal Martyrdom
6. The Slaughter Of Innocence
7. At The Haunted Gallows Of Dawn
8. Christfire
9. Within The Ruins Of Eden
10. The Danse Macabre
11. The Beckoning (An Eternity Of Darkness)