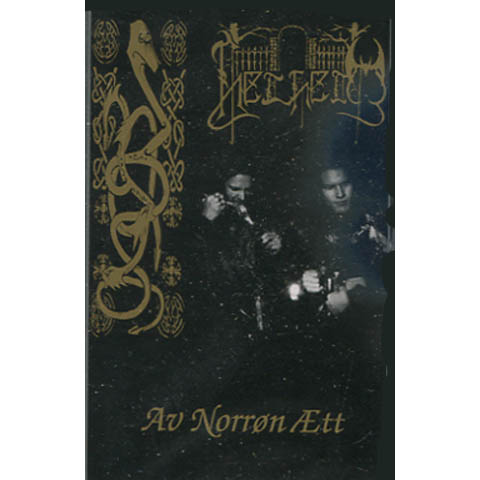 The intro to Av Norron Aett (Of Norse Lineage), a modern neoclassical piece consisting of piano and violin, already makes it clear that this album is not just another extreme metal album, but a highly ambitious work of art. I would not go as far as to call this album progressive, but it certainly is not an easy listen. The songwriting is stuffed with so many details that one has to pay close attention to the music in order to capture the fullness of it. One thing that has greatly improved in comparison to their debut-album is the vocals: they are still very harsh and throaty, but much more bearable than the ear-piercing, extremely high-pitched screams they used on ‘Jormundgand’. Some clean male and female vocals are also featured, and they are well done and fitting for the most part. The drumming is outstanding, not in the way that it is especially fast or technical, but in that many uncommon (for Metal) rhythms are used, but which always fit the music perfectly and make it even more interesting. I think Hrymr is one of the most underrated drummers in extreme Metal, he has a very own unique style, using the drums not only to play a rhythm, but also as a creative tool to add yet more depth to the music. The same goes for the bass: it is not hidden away behind the other instruments, like so many Black and Viking Metal bands tend to do, but it is clearly audible in the mix and used as an instrument of its own, with patterns that often differ from those of the main guitar-riffs. These (mostly tremolo-picked) riffs are sharp and slicing like Viking-swords. ‘Av Norron Aett’ was recorded at Grieghallen, which is a guarantee for great, individual sound, not too polished or overproduced, but allowing every single instrument to be clearly heard. Helheim do not create their ‘Viking’-atmosphere by playing ‘nice sing-along boy-scout-campfire’ melodies, like some other so-called Viking Metal bands are doing, but by stirring violent emotions in the listener that make him dream that he was taking part in a bloody Viking raid. Equally, and fortunately, the lyrics omit shallow stereotypical tales of bearded, drinking, big, strong men; but deal instead with the more occult aspects of Norse mythology, conjuring obscure, apocalyptic visions. Not that ‘Av Norron Aett’ sounds very dark, it is rather epic and majestic, but at a very mature, sophisticated, non-cheesy level. Despite the aggressiveness of much of the music, it always stays varied. Folk-elements are present, in the form of some acoustic interludes and clean folkish vocals, and the sparse use of traditional instruments like mouth-harp, fiddle and trumpet; but they merely complement the music, the foundation of which remains firmly rooted in second-wave Black Metal. I think that the demanding ambitions the band had for this album have been fulfilled. Released ten years before I wrote this review, this truly timeless album has lost nothing of its effect; and even more than its predecessor ‘Jormundgand’, it established Helheim as the second-most important Norwegian Viking Metal band of the mid-nineties, after Enslaved of course. For anybody who thinks that Viking Metal should sound different than Folk/Power Metal with some grim vocals, this album is a must-have.