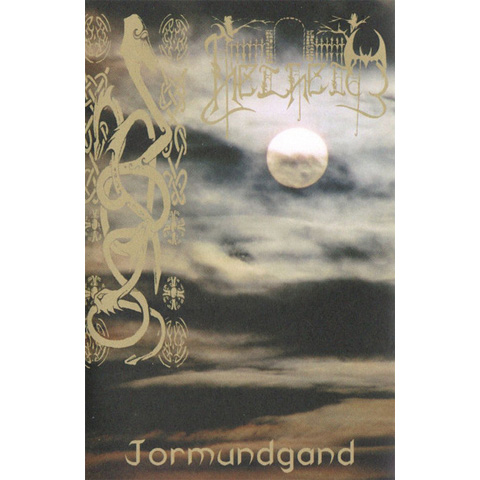 Welcome back in the old days barely after Enslaved first began to flirt with the idea of introducing Nordic pagan themes into the raw form of original second wave Black Metal and thus lifting the style from more direct to more epic forms by introducing vaguely folkoristic elements and pushing the hypnotic repetition within individual songs to whole new levels. Thanks to the exposure coming with a deal on the (in)famous Deathlike Silence Productions, these early efforts of Enslaved were noticed, but not acknowledged as a new style within Black Metal, but more as an obscure oddity, not before other bands began to pick up and expand on the style. Other bands such as Helheim. Though similar to Enslaved’s debut in many ways, Helheim introduce a whole new feeling to their own take on amalganating Black Metal with Viking themes. While similarly epic in the construction of the songstructures, the outlook is a lot less positive, and a lot more grim, and the image forming before the inner eye during listening is a lot less glorifying gruesome but heroic raids over Europe, and dives a lot more into the gloomiest and ugliest parts of Norse mythology, which, I could add, might be no surprise looking at the band’s name. Most prominently in the musical description of course the lack of keyboards springs to mind. Much of the music is driven by guitars, drums and vocals, and only occasionally a piano or a trumpet pops up to spice up a less aggressive and more epic part of a song. The vocals themselves vary between absurdly extreme, lung-collapsing shrieks and more conventional Black Metal vocals, both often in direct contrast to each other, adding to a song’s driving force. Clean voices are being used sporadically, once again to underline the more epic parts of the song. The song structures here are very simplistic, often blasting but always fast during the fiercely aggressive part of a song, whipping forth in its intensity by the climatic contrasts of rhythm and vocal styles, and in its whole themselves being contrasted by aforementioned epic parts, slow and filled with pagan warrior pathos, but crushing into the next furious outbreak of hatred before the listener can even catch a breath. With the compositional brilliance displayed, the ability to spew out one magnificent melody after the other, this creates a sheer anthem to hatred in its most epic form, infinitely dark but infinitely prideful, and glorious all over. The production here is merely an extra bonus, raw as it is typical for Black Metal of that time and in this way helping the atmosphere of the album, but nowhere near the main focus. Considering its quality, and its historical importance to the development of a then young sub-style within Black Metal, this is mandatory listening for everyone interested in Black Metal with a distinct pagan feel to it. And for everyone else, I still strongly advice giving this record a spin or two.