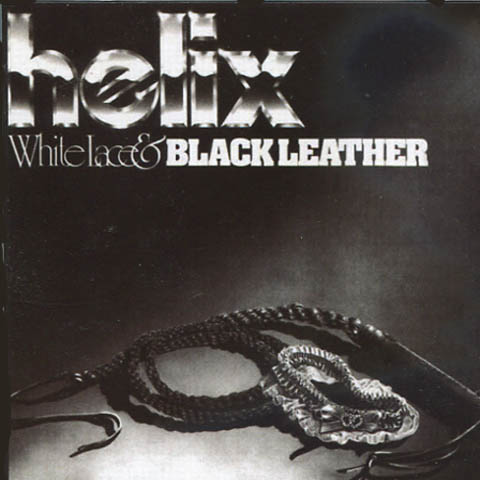 ‘White Lace And Black Leather’ was the second independent album by the Canadian rock band Helix. It was released in 1981. It is their first album featuring bassist Mike Uzelac and only album with drummer Leo Niebudek. This was the band’s last independent release before signing to Capitol Records in 1983. ‘White Lace And Black Leather’ was once again recorded at Springfield Sound. The song ‘Woman Whiskey And Sin’ became a minor hit for Helix in England, and the album became a #1 import and garnered articles on the band in both ‘Kerrang’ and ‘Sounds’, the two premier British rock mags. The album was sold by the band during their live sets in the bars they played back then. ‘White Lace And Black Leather’ was produced by Laclan McFadden who was partners with Jack Douglas. Jack was producing the ‘Double Fantasy’ album in New York with John Lennon at the time. Helix had been doing pre-production at a little practice hall in Stratford, Ontario when they decided to go get a bite to eat. It was at the restaurant that the tragic news of Lennon’s death came over the radio. Laclan and the band went back to his hotel room where he phoned Yoko Ono. An eerie feeling for the band in that moment of rock n roll history.

Track list:
1. Breaking Loose
2. Its Too Late
3. Long Distance Heartbreak
4. Time For A Change
5. Hangmans Tree
6. Its What I Wanted
7. Mainline
8. Women Whiskey And Sin
9. Thoughts That Bleed
10. When The Fire Is Hot
11. White Lace And Black Leather-first version