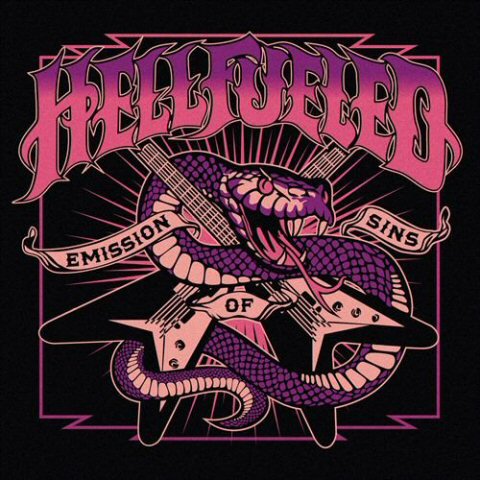 Hellfueled fourth release Emission Of Sins was produced and co-written by gold and platinum-awarded producer/songwriter Rikard Lofgren, famous for his work with Deathstars and Sparzanza among others. A collaboration which has resulted in the most powerful and dynamic Hellfueled-release to date with a stunning production, songs with a strong hit-potential, and of course, loads…and loads of Volume. After half a song it becomes very clear that Zakk Wylde and his pack Black Label Society are one of the biggest influences of this band. The even so characteristic squeal riffs that Zakk is known for are being used by this band. Is this a bad thing? Hell no! Because this band delivers the goods! The band is surely influenced by Ozzy Osborne, Black Label Society, Alice In Chains and old metal a lot, but they write some amazingly heavy and catchy songs on their own. The massive riffing and the vocal melodies work perfectly and with tons of heavy, brutal headbanging riffs on this disc, whos complaining? Their singer Andy Alkman sounds like a younger version of Ozzy Osborne, but has way more power and melodies in his voice then the godfather of metal! Hellfueled is a band that knows its craft and they do it good! One of the better songs on this album is the heavy, but melodic Save Me. Especially this song is the perfect mix of testosterone filled biker metal like Black Label Society, mixed with the melodies of Alice In Chains. Listen closely to the vocal melodies and you would almost believe that Layne Stanley moved to Sweden! Great song! Another highlight is the ultra brutal riff madness on the song Im The Crucifix, which kicks in with a thick as mud heavy riff! Also the catchy and groovy For My Family And Satan is another great headbanger to sing-a-long with. Dust of your biker jacket, put on your boots, get some pints of lager and bang your head off to this great album of heavy metal. Emission Of Sins contains of 11 high-octane metal-anthems guaranteed to bury all competition. Buy this one. This is the kind of metal I like, baby!