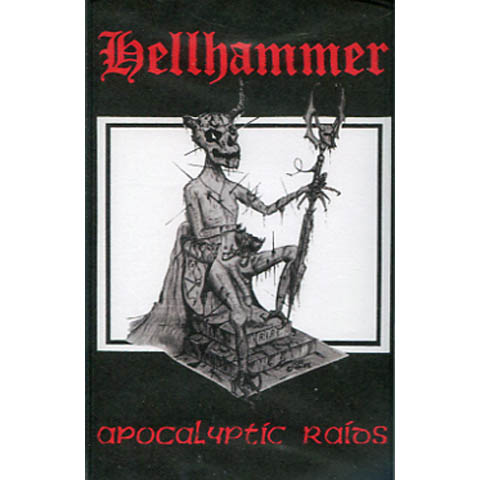 One of the great underground metal bands of the mid-’80s, Hellhammer never came close to reaching the pop mainstream. The brutally aggressive unit did attract a small but loyal cult following during its short life, and two of its three members — lead singer Tom Gabriel Warrior and bassist Martin Ain — went on enjoy greater visibility with Celtic Frost. And if Celtic Frost’s first three albums served as the musical Lord of the Rings for hundreds of European kids who later wound up in black metal bands of their own, then the ultra-primitive Hellhammer — surely represented The Hobbit. Their Apocalyptic Raids demo left a lasting impression nonetheless, doing the rounds in Europe’s underground tape-trading networks long after the band had disintegrated. Despite their crude sound and dubious quality, the demos were eventually released by Noise Records with the title Apocalyptic Raids. This cassettes also features 2 bonus tracks from the Death Metal sampler. Those who fancy Slayer, Testament or Metallica at their heaviest will find much to treasure on Apocalyptic Raids. Sledgehammer offerings like “Triumph of Death,” “Revelations of Doom” and “Messiah” are quintessential metal — morbid, dark, pessimistic and unapologetically intense. Hellhammer launched probably thousands of copycats but this is the real deal and a stone-cold classic… accept no substitutes.