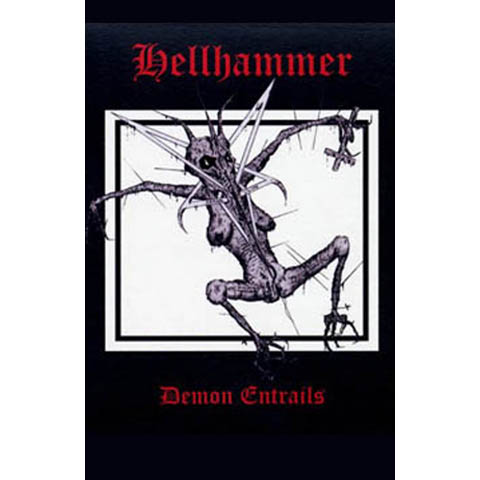 A beautiful 3 cassette box featuring the Hellhammer demos as well as 3 posters, 3 postcards, a patch, a metal pin housed in a cassette case, and a huge booklet and a numbered certificate SIGNED by Tom G Warrior. Limited 1000 numbered copies

‘Demon Entrails’ includes the classic Hellhammer demos ‘Death Fiend’, ‘Triumph Of Death’ and ‘Satanic Rites’. Hellhammer founder Tom Gabriel Fischer points out the importance of this release: ‘The release of these demos is very significant to both Martin Eric Ain and me. No matter how one looks at Hellhammer, this was our first recorded music so many years ago, and it represents the radicalness of our own lives at the time. These demos became the foundation to everything we later created in Celtic Frost. Hell reigned on earth.’ ‘Demon Entrails’ has been specially re-mastered from copies of the original master tapes under the supervision of Tom Gabriel Fischer, and the demos now represent Hellhammer exactly as the band sounded when recording these songs in June and December of 1983. Drawing from a wealth of previously unknown historical liner-notes, material and artwork, as well as plenty of unreleased Hellhammer photos from 1982 to 1984, ‘Demon Entrails’ features all lyrics and essays detailing the individual demo recording sessions.