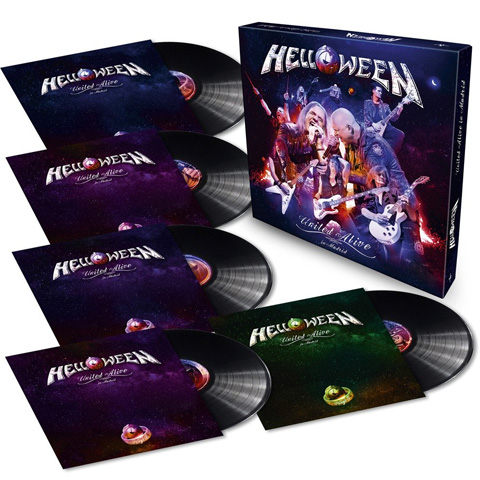 What belonged together needed to be joined: Pumpkins United. However, this birth was never just an original line-up reunion, but the real deal. The ultimate cast consisting of all 7 metal heroes: Andi Deris, Michael Kiske, Michael Weikath, Kai Hansen, Markus Grosskopf, Sascha Gerstner, and Daniel Loble. Or in other words: A dream come true for fans from all over the world, who never stopped wishing for exactly this union. What followed, was a whoop of joy from North German river Elbe to Rio’s Sugar Loaf Mountain, and in fall 2017 the kick-off of the unbelievable Pumpkins United World Tour in Mexico. The shows celebrated the greatest hits from three decades and offered a breakneck trip through time and the entire Helloween repertoire – including songs, the band hadn’t played live for a very long time, or even never before. The Pumpkins United World Tour caused a metal quake that was on almost every genre cover, and made the world’s biggest metal magazine BURRN! dedicate an incredible four cover stories to the tour. After dates in the US and additional shows in Latin America, this tour for the ages ended in December 2018 with a highly emotional finale in Hamburg, where it all began in 1984. – Unforgettable metal nights that fans as well as musicians would love to experience again and again. United Alive captures every singular solo, every spontaneous gesture, and every emotional encore of the Pumpkins United World Tour