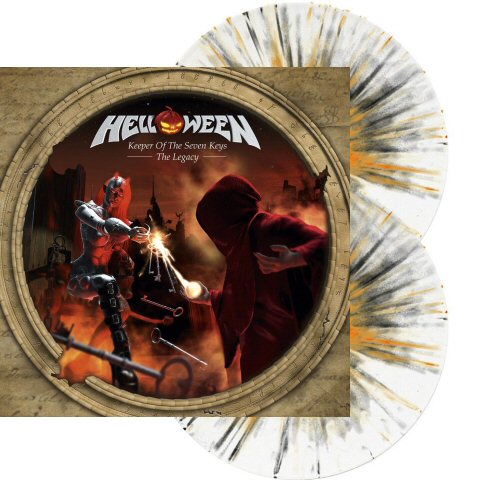 Helloween -Keeper Of The Seven Keys The Legacy dlp [splatter]

In the world of heavy metal, 1988 may be best remembered as the year that prog metal was born, thanks to such popular and enduring releases as Metallica’s …And Justice for All, Queensrÿche’s Operation: Mindcrime, and Iron Maiden’s Seventh Son of a Seventh Son. But predating all of these aforementioned titles by a year was Keeper of the Seven Keys, Pt. 1 by Germany’s Helloween. Influenced equally by Maiden and Judas Priest, the group specialized in both anthemic metal (with operatic vocals) and tricky musical bits — as evidenced by the epic track “Halloween,” which received quite a few spins on Headbangers Ball as an edited version. Although the group issued a second installment of Keeper of the Seven Keys a year later, they were not able to keep pace with the other prog metallists — despite carving out a lengthy career for themselves (with countless lineup switches). Come 2005, the group — whose only recognizable bandmember is guitarist Michael Weikath — returned to what put them on the map in the first place, issuing Keeper of the Seven Keys: The Legacy. A sprawling double-disc set, all the musical elements from the earlier Keeper releases are back in place, as evidenced by a pair of lengthy tracks, “The King for a 1,000 Years” and “Occasion Avenue,” as well as the leadoff single, “Mrs. God.” While it probably won’t help touch off another “prog metal movement” like Keeper of the Seven Keys, Pt. 1 did, longtime Helloween fans won’t be let down with the latest Keeper instalment.