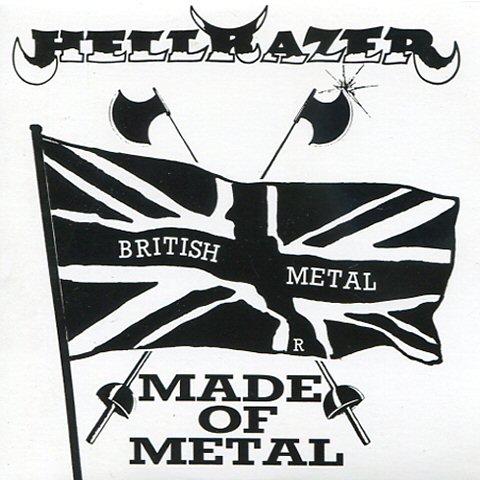 Hellrazer -Made Of Metal cds

Mini cd replica of the legendary NWoBHM single from Hellrazer. Original artwork, layout design, and the same tracks like on the original single. Official reissue authorized by the band in a limited run of 500 copies only. Hellrazer from London was formed in 1981 and the band debuted with their The Devils Got The Deeds To Rock And Roll single the same year. However the problem with their debut was that the band probably should have learned to play their instrument first. Back then the band were more into make up and glam than the music. The continue to write material but in the mid 80s the band decided it was time to toughened up their image. The released this single in 1987 and by then they were wearing leather and studs and had adopted a much harsher metal sound. The band promoted it as if it was their first release and the single featured a huge union jack flag with the text British Metal, however the band were a bit to late to gain interested from the NWOBHM follower as thrash metal had taken over the musical landscape. The title track Made Of Metal also made it onto the Ebony compilation album “The Metal Collection Vol.1” but the band probably disbanded shortly after the release of this single. The two tracks here are great heavy metal tracks but it lacks in production. It should have sounded a bit more powerful. The Hooligan track is slightly punish giving it a lightweight Warfare touch. With a more powerful sound and if it had come out a couple of years earlier this really could have been a NWOBHM hit.

Track listing:
1. Made Of Metal
2. Hooligan