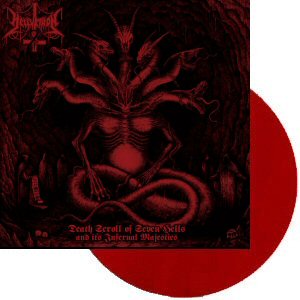 Hellvetron, a black metal band originating from the United States, have definitely surprised with their debut full-length entitled “Death Scroll Of Seven Hells And It’s Infernal Majesties.” They’ve been around since 2004 and seemingly came out of nowhere, after having released only one demo in 2005, with this full-length, an album that isn’t quite what you’d expect from a black metal album. On top of everything, it has an incredibly evil, sluggish doom-laden sound, the ‘black metal’ part being merely an insignificant underlying theme. A way to describe them would be if you put members from Teitanblood and Bethlehem together to create an album. This isn’t very accurate either, though, since it doesn’t feature the furious blasting that Teitanblood pull off, whereas it shares, primarily, only the ‘dark’ factor with Bethlehem. What these three bands do have in common, however, is an incredibly doomy ambiance (Teitanblood slightly less, they are similar mainly in production value and general evilness.). Hellvetron are far from being your stereotypical black metal band; rather, they generate some of the doomiest sounds every to have been emitted from an alleged black metal album. Their riffs are composed, usually, of long, foreboding and creepy notes that are allowed to resonate for a while; these chords having a very atmospheric effect, along with the strange chants that sneak in the background on occasion. The guitars are very low in the mix, their main focus being to turn up the demonic vocals and drown out everything else, resulting in a dark and ominous sound. There is little variation throughout the album, with the exception of the occasional tremolo passage that serves but only to produce a strange effect on the ear; a far off, distant echoing. I can just imagine the two members in Hellvetron getting together and making a pact to never, ever speed up the tempo in their songs. There is practically no variation in regards to speed, causing the music to sound constantly downtrodden and droney. The production provokes the listener to imagine the recording process having been performed in a dark, empty chamber of sorts, with Lovecraftian creatures slithering about on the floor and candles lit on the walls surrounding the empty cavity. The album is monotonous both in its guitars and the drumming, of which the latter hardly plays a roll in the overall development of the music. The drums are always at an unbearably slow speed, causing little effect, merely serving to back up the guitars and the vocals. The vocals are growling snarls that almost never cease to howl what I can only imagine are some of the darkest lyrics ever to be scrolled down on paper. “Death Scroll Of Seven Hells And It’s Infernal Majesties” is certainly a peculiar, tormenting experience that will leave any listener feeling hopeless and forlorn, desperate to claw out of its merciless, sluggish hands that will pry you down to the ground; yet feeling strangely fulfilled and at the same time, empty. It is a hard album to tag a specific rating to, simply because of its vast strangeness, and it’ll leave people feeling uncertain of what to think of the album as a whole. All in all, a decent and worthy listen.