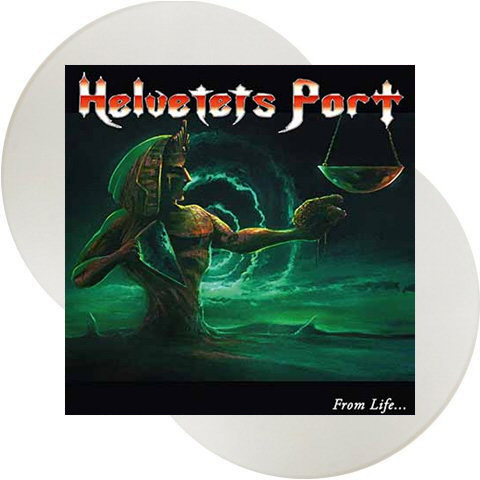 It’s been a while. Exodus To Hell, Helvetets Port’s debut album, was issued in 2009, the 12” EP Man With The Chains a year later. Almost a decade on the band issued their second album From Life To Death and lead singer Witchfinder explains the long gap between the two records: The last show before the hiatus was in December 2011, and then we got going again in 2014. So in reality the break wasn’t super long, even though it seems that way given the time between releases. The band was never officially over, but I guess we kind of needed a break and then a fresh start. I think having a break serves as a reminder later on that you really don’t want to not be playing heavy metal. If you compare the 14 songs on From Life To Death with the band’s debut Exodus To Hell, the difference couldn’t be more evident: Helvetets Port in 2019 is a much more accomplished band. Singer Witchfinder explains in more detail: When we got back together again in 2014, we started gathering some material for an album and began writing some new stuff. Two of the songs were written around 2008 and there are some old parts used for other songs; one riff is even older than anything we have released previously. Although most of the material was written around 2014-2016. It’s kind of a wrapping up of our entire career thus far. Are Helvetets Port influenced first and foremost by home grown Swedish bands, obscure Swedish bands? For example by the original early 1980s Grave, who put out only one 7” single (sounding a bit like the Swedish Deep Purple). And there is also a band called Neon Rose, who recorded several damned heavy hard rock albums from the mid-70s on … Witchfinder tries to explain: The basic influences are bands like Gotham City and Heavy Load, when it comes to the general feeling of the music. At the same time you can say there’s a plethora of different influences all converging into one big broad idea of what heavy metal can be all about. Sometimes you can also be influenced by a band that is really difficult to approximate. For example, I think a lot about both the bands called Tyrant from the UK, and Zone Zero from Sweden, although I’ve never written a song that sounds like them (to my knowledge).