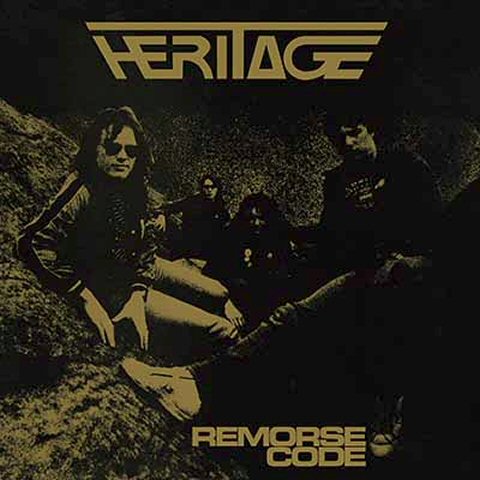 One of the lesser lights of the New Wave Of British Heavy Metal explosion, this band from Yorkshire, England, featured Steve Johnson (vocals, guitar), Steve Barratt (vocals, guitar), Fasker Johnson (vocals, bass) and Pete Halliday (drums). Like fellow north England group Gaskin, Heritage signed to the predominantly punk-orientated Rondolet Records, releasing their debut album, Remorse Code, in 1982. The album was as diverse and deep as the NWOBHM itself, with melodic material like the Thin Lizzy-esque ‘Endless Flight’ rubbing shoulders with the rampaging ‘Attack Attack’. The oddly-named instrumental ‘Rudy And The Zips’ gave the band the opportunity to let loose, and a re-recording of ‘Strange Place To Be’ brought the album’s running order up to ten. Unfortunately, before long their record label was in financial difficulty, and by the end of 1983 both Rondelet and Heritage had been consigned to the history books. This release features the band’s entire vinyl catalogue, combining the album with their sole single, and is a true celebration of a band at the height of their form. To be played loud and enjoyed immeasurably…