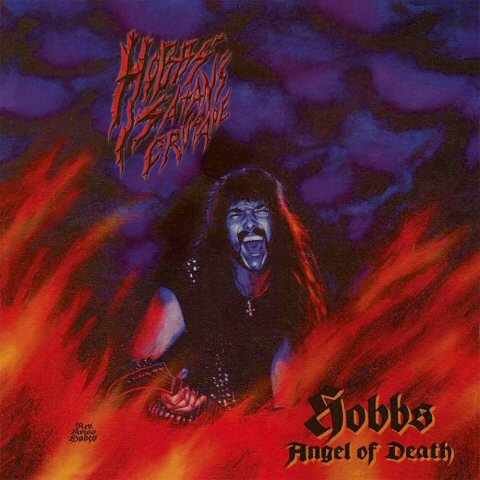 Satans Crusade isn’t a new album by one of Australia’s finest Thrash exports but a very cool compilation of both the band’s classic demo tapes ‘Virgin Metal Invasion From Downunder’ (from 1988) and ‘Hobbs Angel Of Death’ (from 1987). Eight of the eleven featured tracks also made it onto the band’s self-titled Steamhammer Records debut album later on, while ‘Chainsaw Massacre’, ‘Liar’ and ‘Satanic Overture’ remained unreleased on album up till now. Which means that all the die hard fans of the band (who missed out on those demos back then or only own poor copied versions) not only get some new material to freak out on, but also hear the classic tunes in their original versions. The production / sound on both tapes had already been pretty good back then (remember that these are demos), but even got remastered for this release here. Hobbs Angel Of Death musically could be labelled as a cool mixture of vintage Slayer with lots of influences from the Thrash invasion that took place over here in Germany in the early to mid 80s (old Sodom, Destruction etc.), but always unique and technically matured enough to stand out on their own. This album comes with all the lyrics, a couple of cool old pictures, a band history and an excellent cover art (obviously based on the debut album’s idea), courtesy of Sadistik Exekutions Rev Kriss Hades. So, all in all this is a very cool release that no die hard Thrash Metal maniac should miss out on.