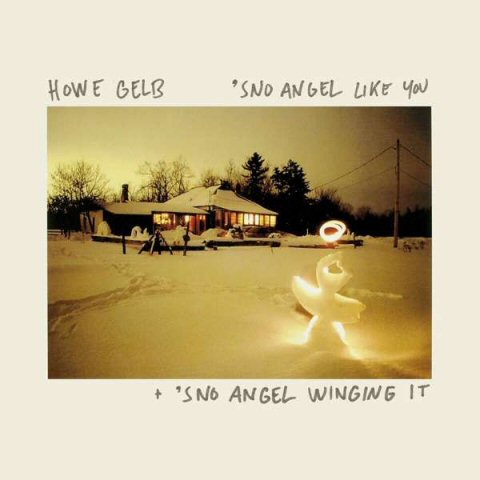 One of the first things that strikes you about Howe Gelb and ‘Sno Angel’s Like You or Howe Gelb’s ‘Sno Angel Like You, depending on how you wish to see the project , is that Gelb recorded this set with a gospel choir from Canada called Voices of Praise and he called the project “Sno Angel” and they made this record called “Like You.” Anyway, you get the idea; it’s one of the Arizona desert dweller’s typically arcane musings. Gelb recorded this baby in Ottawa with drummer Jeremy Gara who now skins with Arcade Fire. There are a few other musicians hanging out and playing here as well; most notably Dave Draves on B-3 (Gelb plays one too), and Fred Guignon, who plays a mean slide guitar on six tracks. There are no gospel tunes here in the proper sense. This is a Howe Gelb record. You know — slippery, loose, mistakes left in, hummable — it’s less quirky because the new tunes were written with the choir in mind. In addition to the seven new songs, there are a trio of Giant Sand tunes tossed in to be re-recorded, and three songs by the late Rainer Ptacek — including his classic “Worried Spirits.” The first thing that hits you is the sound of this disc. It’s spacious, clean, and live-sounding. The basic tracks were recorded by Gelb and Gara and the choir was added later — though not much later — and it feels spontaneous. Gelb’s voice is coming to resemble Ray Wylie Hubbard’s in more ways than one, and it serves him well. Like You feels like an album, though some cuts stand out for their grit and funky delight, such as Ptacek’s “That’s How Things Get Done,” with its shambolic distorted guitars and over-amped bassline. “But I Did Not” is Gelb’s own attempt at writing a kind of gospel tune, though it comes off more as a gritty, rollicking blues. (When he asked the choir director if it would be possible to record with the Voices of Praise, the choir director said, “Sure, just keep it positive.”). As treated here, Ptacek’s “Worried Spirits” is a far cry from the spare, solo National Steel version that its composer recorded in the 1990s. Acoustic guitars get turned up to ten, the pace is quicker and it’s still spooky but in a more urban way. The B-3 low-note triggers are a killer effect. The guitar break in the middle is simply psychotic. But the joy of the Voices of Praise is infectious, and they can not only tear it up vocally, but they way they dig into the feeling of the songs makes them feel so present here: they can offer a lamp in the desolation and darkness without cheap sentimentality. The tender “Neon Filler,” first recorded on Giant Sand’s Ramp, is dramatic — even breathtaking. Gelb establishes the mood in the first half, spinning out his poetic tale, and when the choir enters it’s simply stunning and turns the song inside out, moving the sadness up just a notch at first and then transforming it. Fans of Gelb’s have to be excited about this because it’s perfect, a career high. And for those who don’t know who Gelb or Giant Sand are, but want something “extra” with their sun-drenched Americana, this is just the thing. In fact, it’s just the thing for anybody who doesn’t have sawdust running in their veins instead of blood.