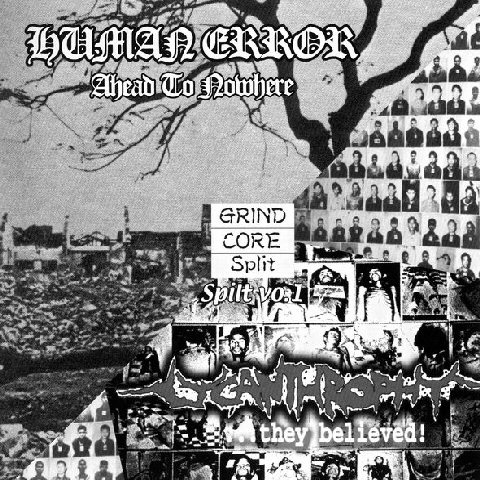 Reduced price due to cd being ex-

Coming from Hungary, Human Error includes only a few grind touches in their music as their style is mostly focused on Punk/Hardcore with Crust parts. They make me think about some old Dead Kennedys, Agathocles, S.O.B and Disrupt for the crusty riffs. I wouldn’t call this original but I don’t know if its even possible to create new Crust riffs nowadays however I must say that Human Error is a powerful crust-grind tornado. It goes from a charging crust riff, and then slows down into a deliberate pounding punk part just to go back to some blasting again.

The Czech Republic is one of Mater Terras most unique, strongest, most convincing and most persuasive countries when it comes to grindcore. The average grind-fan will be able to sum up tens of bands that come from this East-European country just like that. In their fifteen years of existence, Lycanthrophy released tens of splits especially (more specific: almost twenty split-releases, I think, with bands like Immured, Suffering Mind, Malignant Tumour, Gride, Blood I Bleed etc.). Their performance is more dense and heavy, with a hardcore-attitude and a power violence-approach. It reminds me to a symbiosis of very early Napalm Death, Capitalist Casualties, Disfigured Corpse, Phobia, Regurgitate or Poppy Seed Grinder, but with the interesting surplus of adding a tiny couple of melodic and / or slow-paced and down-tuned pieces. Lycanthrophy might not have the intelligence of Nasum, Exhumed or Antigama, but fans of grind-gore will and should soak this up