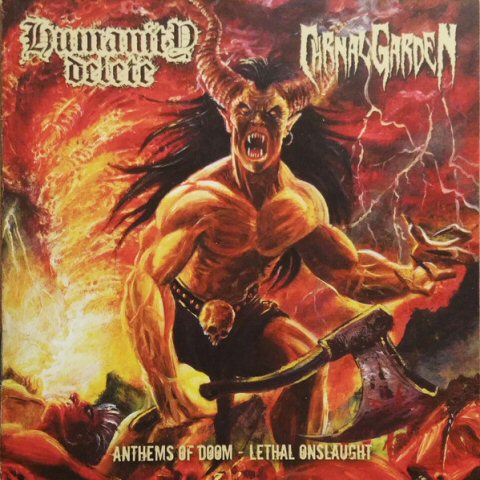 His love for death metal seem to be endless. Its obvious that Rogga Johansson eats and breaths death metal 24 hrs a day and he is one of the most over-productive artists the genre has to offer. But there are plenty fans out there that follows everything this man does and some might wonder what they would do if they wouldn’t get their monthly share of a new Rogga release. Humanity Delete is his one man project and a split single with just four songs sounds like something Rogga writes while chewing his breakfast and record his ideas later the same afternoon. The compositions here is four typical Johansson tracks, short and fast, no extras just pure and simple. Pounding death metal with a groove here and there, crunching riffs and growling vocals. Entertaining death metal music just like you want it. Carnal Garden is a band from Athens, Greece that are featured here with four tracks too. These are just as pounding as Humanity Delete but with a less prominent vocals but with a thicker groove