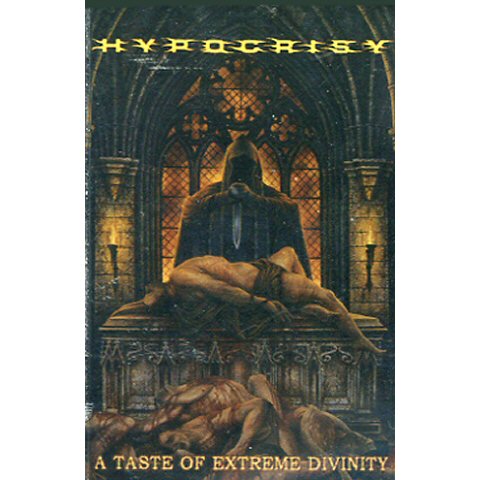 Hypocrisy is the artistic vision of legendary death metal producer Peter Tagtgren; he sings, plays guitar and keyboards, writes, and obviously produces the albums. He’s backed by ace musicians, too. Bassist Mikael Hedlund has been with him since 1992, while drummer Horgh has been with him since 2004, shortly after his other band, black metal legends Immortal, went on hiatus. This album, Hypocrisy’s eleventh (in addition to some live discs, compilations, and 2008’s cowardly re-recording of 2002’s underrated and unfairly dismissed Catch 22), is a strong effort. Though almost every song has a chorus that’ll make you want to pump your fist — the Swedes have a genetic predisposition toward melody, even in their extreme metal — the performances also have a sizable impact, with crushing riffs and powerful drumming. The downtuned, grinding riff of “Solar Empire” sounds like a tank rolling over the listener’s torso, while “Weed Out the Weak” blasts forward at a speed recalling Horgh’s other gig, mixing staccato thrash riffs with black metal’s headlong fury. Sometimes the band slows down, as on “Global Domination,” which begins in almost doomy territory before becoming another melodic death metal churn. A Taste of Extreme Divinity is a very good album, better than 2004’s Arrival and equal to the band’s self-titled 1999 disc. Ultimately, though, Hypocrisy are destined to forever be a band known to cognoscenti of Swedish death metal, and largely unknown to the wider metal scene. These songs aren’t destined to become classic metal anthems, but they’ll keep existing fans in the fold for sure.