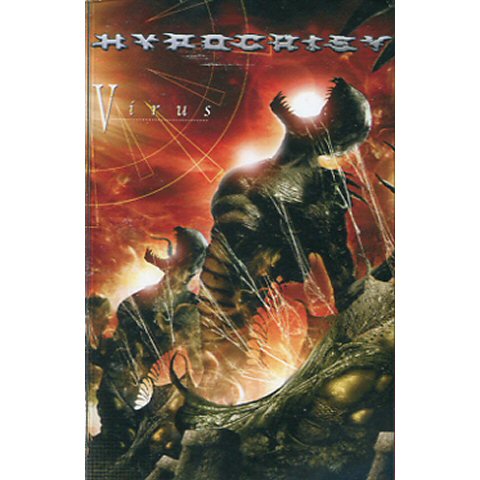 Although Hypocrisy’s career has continually had to contend with leader Peter Tagtgren’s parallel success as one of Scandinavia’s busiest producers, his workaholic ways have generally guaranteed regular touring opportunities, and albums both solid in content and frequent of release. Sure enough, 2005’s ‘Virus’ is Hypocrisy’s tenth full studio effort in just over a decade (with several EPs and live/greatest-hits sets snuck in between), and longtime followers will likely be relieved to discover that it doesn’t explore tangential metal styles of temporary popularity, as did occasional previous efforts such as 2002’s nu-metal-leaning ‘Catch 22’. Instead, new songs like ‘Warpath’, ‘Scrutinized’ and ‘Compulsive Psychosis’ generally apply the melodic sensibility and arranging simplicity of the ’90s Gothenburg scene to the harsher, thrashier rhythmic attack common to the more extreme sounds that preceded (and followed) it, forging an amalgam of death metal-based subgenres representative of Tagtgren’s wide versatility both in front of and behind the studio’s plate-glass window. Of course, by the same token, one could also accuse it of being vague in its direction, but as long as the majority of these songs stand up to scrutiny when it comes to compelling and memorable songwriting — which they do — who cares? ‘Virus’ qualifies as Hypocrisy’s strongest outing in some time, showcasing a consistent assortment of both old-school and future-looking devices that are bound to satisfy the majority of their fans. Solo on ‘Scrutinized’ by Gary Holt from Exodus