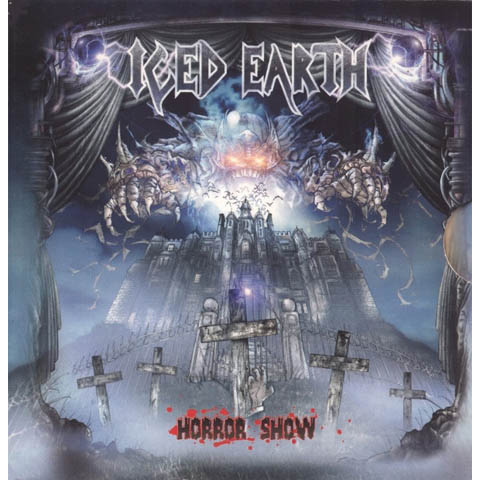 American power metal’s last hope returns with a monumentally complex, full-octane fan-boy-driven concept album. Fear not, the pummeling thrash chords of old still remain, while Paul Stanley’s — er, Matt Barlow’s — vocals still crackle with molten energy and untapped emotional well. Leaders Jon Schaffer and Larry Tarnowski maintain their frenetic musical hunger as potent axemen, adding additional emotional layers to create the most heartfelt and ambitious Iced Earth release. Horror Show’s mastery lies in its promising (for the power metal genre at least) as sources of inspiration classic horror films, and most prominently the Universal Studios-type from the ’30s. To go further without mentioning the addition of drummer extraordinaire Richard Christy of Death/Control Denied fame or Death/Testament/Sadus bassist Steve DiGiorgio would be an injustice toHorror Show, as they help complete one of American metal’s most musically enlightened lineups. Christy impels the rest of the group to march to the beat of a faster, complex drum, adding dynamic, patient layering to slower pieces like “Ghost of Freedom” and pummeling rhythms and cymbal dances to thrash beasts like “Wolf.” “Jack” features DiGiorgio at his faster-than-thou, slap-bassin’ best, as his presence is felt lock, stock, and barrel through Horror Show. Clearly, though, the greatest variable for Iced Earth’s exponential, patient growth was the mind-melding meeting of minds Schaffer experienced with Blind Guardian’s Hansi Kursch in his stint with Demons and Wizards. Blind Guardian is arguably the most insightful, original, and talented power metal band, and their magical aura seems to have rubbed off a bit on Schaffer’s compositional skills on several tunes, such as “Frankenstein,” the eerie “Damien,” or the epic glory of “Im-Ho-Tep (Pharaoh’s Curse).” In particular, this last piece utilizes some subtle Middle-Eastern rhythms and overtones to create a more authentic impression, and the solo is straight-up Blind Guardian (kudos to Tarnowski). Christy and DiGiorgio’s technical verisimilitude honed in Death shines brightly on every composition, but in particular on the opening of “Wolf” or sections of “Dracula.” Unlike past releases, Horror Show didn’t deliver an unrewarding knockout punch on first listen. In fact, it took quite a few listens to see the hidden gems which make this album so fantastic; so give the album its due attention — it will pay off in the end. Other highlights include the mid-paced classic German-esque thrash of “Dragon’s Child” and the ambitious, yet fully realized mini-opera (reminiscent of Queensryche’s “Suite Sister Mary”) “Phantom Opera Ghost.” Enjoy the show.