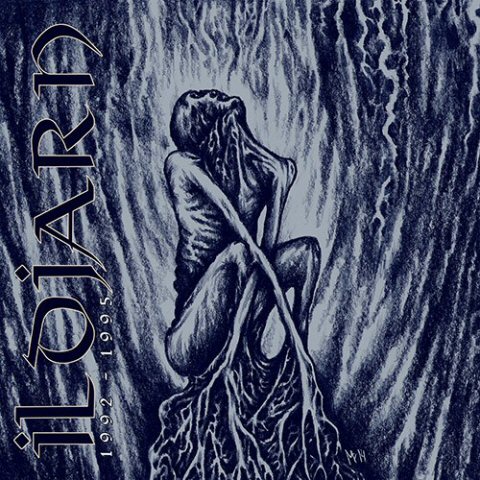 This compilation covers a 3-year period in Ildjarn’s musical development. All the songs you hear are very short, usually about 2 – 3 minutes, with only one song ‘Krigere’ at the end coming near the 5-minute mark. In structure, the songs are very basic, almost ultra-primitive, with the rhythm section banging away without much variation at a steady clip. An early track on this set, ‘Kronet’, is fairly typical: what you hear at the beginning is more or less what you hear close to the end though at some point in the song the bass drops out temporarily; and the song also shows Ildjarn’s vocals at their most usual: extremely distorted and harsh like an especially embittered being who has so much bile and hostility against humanity that you can hear it searing through him as he sings. Then you get tracks like ‘Himmelen Svartner’ on which Ildjarn’s vocals are very whispery though the hatred is still there. With such a basic template, the music turns out to be varied in the sense that each of the 28 songs has its own distinctive rhythm and style. In its own severe way the music is well-crafted and shows some folk music influence. The music being so raw and intense, and so full of anger and venom, and the style being so severe to the point of being ascetic, this album won’t have a wide appeal but it’s a good introduction to Ildjarn’s early work.