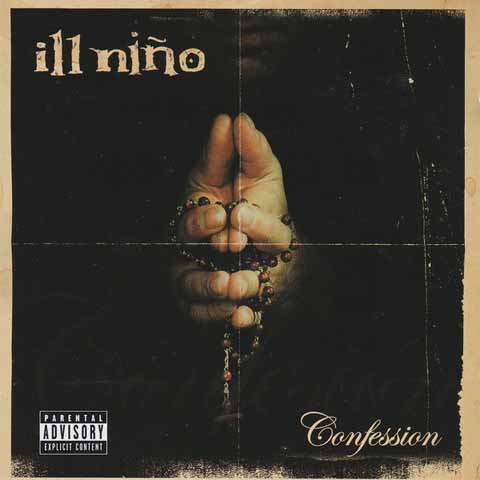 Ill Nino’s second album, Confession, is a much more personal album than their debut. Combining metal and Latin influences (I know this sounds strange, but trust me it works), this band has successfully produced melodic, heavy and beautiful songs. While I feel this is their most personal work, I don’t like it as much as their previous album, “Revolution Revolucion.” However, it’s a treat to see that they didn’t recycle that album and have come out with a newer and different sound while still maintaining a dark and heavy approach. This is a really talented band on the metal scene, as they take their music to different levels. Their sound is very unique and they never sound like they’re repeating the same old thing over and over again. The lead singer knows how to growl and sing with the best of them, and the guitars are absolutely amazing. What it all comes down to is that Ill Nino is a band with extremely talented people. It’s clear that these guys always have different ideas going around, and they use that to their advantage. People who are more familiar with their debut may be a little let down by this album, as it isn’t nearly as heavy. Don’t get me wrong, the album is still very heavy, just not as much as “Revolution Revolucion.” I really love the sound of this album and was not let down, although I can’t honestly say that I prefer this album over the previous one. I can pretty much listen to the whole album in its entirety, but I find myself skipping to my favorites rather than just letting the entire album play all the way through for the most part. The only downside of this album is that I don’t find it has that punch or intensity as their first release, and it’s not because of the different sound. “Confession” is a fine album from a group that has once again shown great promise. There’s a lot of growth within this album, even though I feel that it isn’t as powerful or as memorable as their debut. Ill Nino knows how to make great music and I look forward to seeing what they have planned next. If you’re a fan of Ill Nino, then this is something to check out. If you haven’t heard Ill Nino yet, then I strongly suggest picking up a copy of “Revolution Revolucion” and then checking out “Confession.” Not a bad effort, if you ask me. I hope to see further progress from them in the near future.