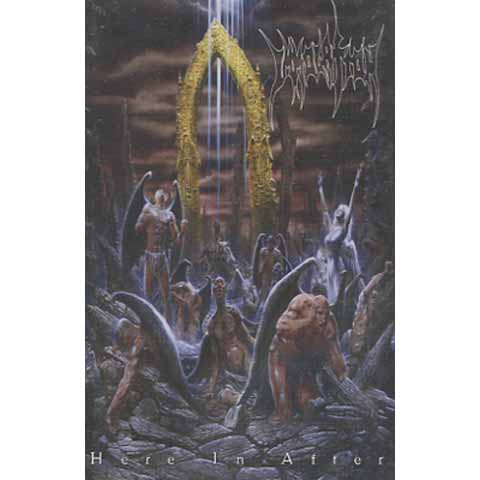 Immolation -Here In After MC

This is death metal. Satan dwells within the soul of bands like these. Immolation succeeds at creating an evil atmosphere that is only attainable through death metal. There is no studio magic, endless sweeps, or pitch shifted vocals. This is death metal in it’s most effective form. The vocals found on this album are somewhat comparable to that of John McEntee, in that they are very low. They are not heavily distorted or pitch shifted, just evil as hell. His sense of timing as a vocalist is near perfect, which is something not often considered when analyzing vocals. The drumming on this album is downright spectacular. The music on this album is very technical (and I don’t mean full of sweeps and other pointless elements), but still fairly easy to digest. The drummer holds his own very well, with lots of off-time beats, intricate fills and not much in the way of repitition, which I love in a drummer. Arguably the most outstanding element of this album is the guitar work. The riffs on this album are absolutely genius, with tons of oddly timed riffs and dissonant harmonizations. The guitar work is some of the most varied I’ve ever heard in all of death metal, matched only by a rare few (including Canadian counterparts Cryptopsy and Gorguts). In conclusion, this is death metal of utmost quality, the way it was meant to sound. No frills, no gimmicks, just evil.