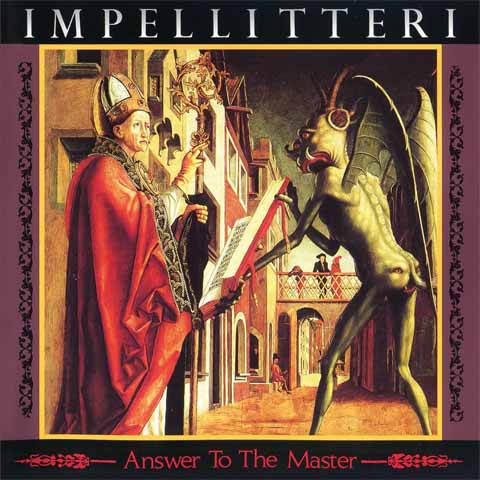 Impellitteri –Answer To The Master lp

American guitar hero Chris Impelliteri released his fourth Impelliteri album, Answer To The Master, in 1994, a time when alt-rock, grunge and pop punk ruled the charts. Neo-classical guitar music was not on anyone’s lips. Impelliteri got some attention back in the late 80s with his Stand In Line album, much thanks to the reason that it had former Rainbow singer Graham Bonnet on vocals. When the band returned in 1992 with Grind And Bear It it was with original singer Rob Rock and by loosing Bonnet’s name it also meant that many Rainbow fans lost interest in the band. Answer To The Master is a great album with massive riffs and its not really a guitar wankery album. Here we have a heavy metal album where Chris keeps his solos short and straight to the point. Its obvious that he puts the song first and his virtuoso displays second. Chris shows that he has an excellent grasp on tapping techniques, and doesn’t shy away from inserting weird sound effects (The King Is Rising) or classical scales (I’ll Wait) into otherwise standard hard’n’heavy songs. However, these few displays of wankery are always done in under a minute, and quickly give way to another infectious riff or chorus. The exception is Hungry Days, where the guitar line is basically one huge solo playing behind the vocals.