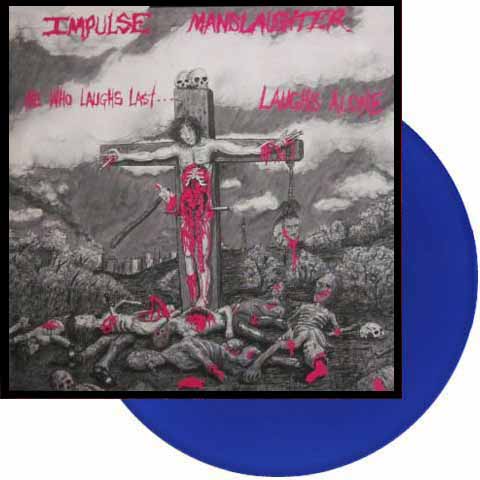 Reduced price due to cover being vg+ and vinyl vg

Punk influenced Death / Thrash outfit. Chicago’s Impulse Manslaughter would be one of the very first signings to the Nuclear Blast label. In fact, the band had some songs on the compilation album ‘Senseless Death’ featuring such bands as Attitude, Sacred Denial, Fear Itself, etc.). This compilation album was the very first Nuclear Blast release. The first album ‘He Who Laughs Last…Laughs Alone’ followed in 1987. Bassist Nick Stevens would depart in late 1987 and Chris Hanley duly switched from guitar to bass again to cover whilst Mike Schaffer was drafted as guitarist. This is loud crossover with such intense drumming. If you went to a Impulse Manslaughter concert you just had to be ready to snap your neck in the middle of the pit.