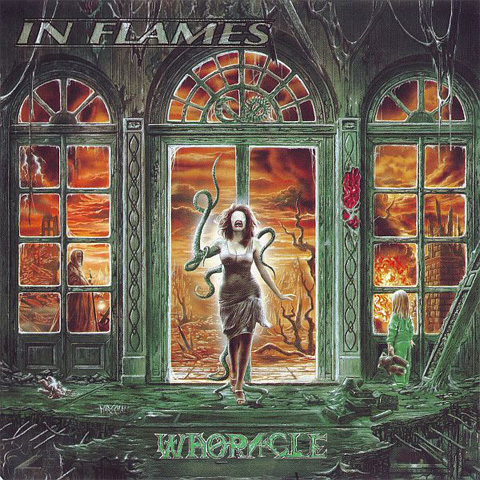 Official licensed made Iron records release with 2 bonus tracks, in jewelcase made for the Baltic States, Moldova, Ukraine, Byelorussia and Russian countries

A master of progressive death metal or the “Gothenberg sound” practiced by many a Swedish band, In Flames delivers one of its best efforts with 1997’s Whoracle. One extremely heavy number after another flows continuously from this record’s track list, including standouts like the mind-bending “Gyroscope” and “Morphing Into Primal,” just two of the original and extremely well-executed songs offered on this release. Indeed, some tracks are much better than others on Whoracle. Softer numbers like “Jester Script Transfigured,” with its half-acoustic Metallica ballad vibe, could probably have been left off this otherwise powerful recording. There are also some rather unnecessary vocal histrionics, most notably on “Worlds Within the Margin,” but this kind of overcooked “singing” really comes with the death metal territory. None of these sour notes manages to damage Whoracle, and the record has ultimately become accepted in the highly factional underground metal community as an important release not only for In Flames, but for the entire melodic death metal movement.