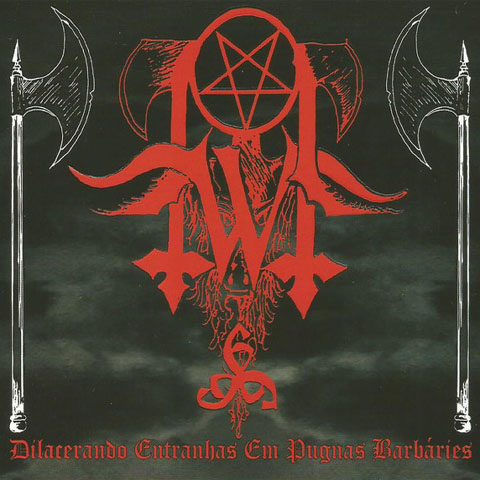 Brazil is the leading country when it comes to South American black metal. Brazil has both the history (as does Colombia) and has the greatest number of bands. Cogumelo was the label that brought the music outside of South America and got world wide metal fans opening their ears and eyes for bands such as Sarcofago, Mutilator, Holocausto, Chakal, Vulcano and so on. The countries black metal scene is as active today as it as back in the mid and late 80s. Bands such as Mystifier and Vulcano are still going strong but there are plenty of new bands rearing their ugly head and showing that they indeed deserves attention. One of those bands are In Infernal War formed in Salvagor back in 2002. This band is notable for two things, besides the music, one of them is that it features Leandro Cerqueira (Sado Baron Szandor Kastiphas) a multi-instrumentalist artist that sings, play keyboards, bass and guitar for several acts. The biggest act he has been involved with is Mystifier were he played keyboards between 2000 and 2013 and from 2003 he also performed bass and two years later he was also their singer. So singer, bass player and keyboard player up until 2013.You will also find him singing death metal in Forsaken or laying down all instruments for the doom metal act Nigrae Lunam just to name a few. A busy metal musician indeed. The other thing worth mentioning is that the band has a female vocaist called Nuit (real name Lorena). There are a few female vocalists in extreme metal and Nuit has an evil sounding voice indeed. Suits the bands music very well. Check this out