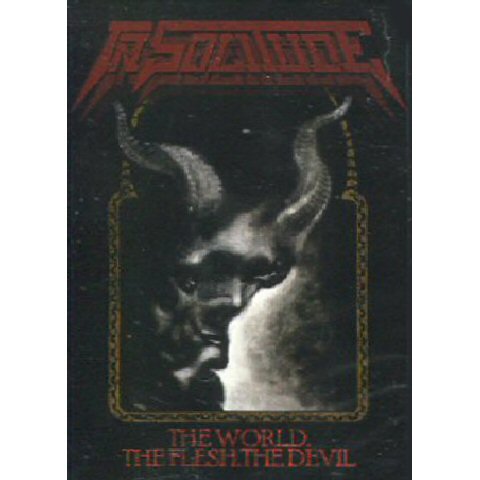 In Solitude -The World The Flesh The Devil MC

In Solitude’s second full-length, 2011’s cryptically named The World. The Flesh. The Devil, vastly improves upon their first effort, and quickly elevates the Swedish quintet’s retro-metal credentials by simultaneously showing convincing sonic authenticity and giving fresh legs to the heavy metal genre’s coming of age period of the early ’80s. In a nutshell: the band’s sound is largely based on classic Mercyful Fate and the galloping, gothic representatives of the New Wave of British Heavy Metal (Iron Maiden, Blitzkrieg, Cloven Hoof, etc.), then bolstered by new millennium recording standards and a strong songwriting imagination that helps the title track, “We Were Never Here,” “Demons,” and others easily transcend the mere rehashing of old worn-out ideas. Added versatility is also shown on “Serpents Are Rising,” where emphatic melodies recall vintage Praying Mantis, on “Dance of the Adversary,” which descends into a beguiling occult/acoustic coda, and on the clearly self-imposed trial by fire of the 14-minute “On Burning Paths,” which hangs tough for the duration marked by tribal drum sections, bass showcases, etc. (In fact, most of the other songs here don’t feel as long as their average six-plus minutes — a credit to In Solitude’s energy and song smarts.) And, all the while, vocalist Pelle Åhman wisely emulates King Diamond’s haunted histrionic wails but not his teeth-grating falsettos, also resorting at times to a more restrained, NWOBHM-inspired deadpan amid scattered growled mutterings that give In Solitude one of their only remotely modern qualities. But, at the end of the day, that absent modernity feels utterly beside the point here, because In Solitude have immersed themselves so innately under their heroes’ skins that it feels like their own.

Track listing:
1. The World The Flesh The Devil
2. We Were Never Here
3. Serpents Are Rising
4. Poisoned, Blessed And Burned
5. Demons
6. To Her Darkness
7. Dance Of The Adversary
8. On Burning Paths