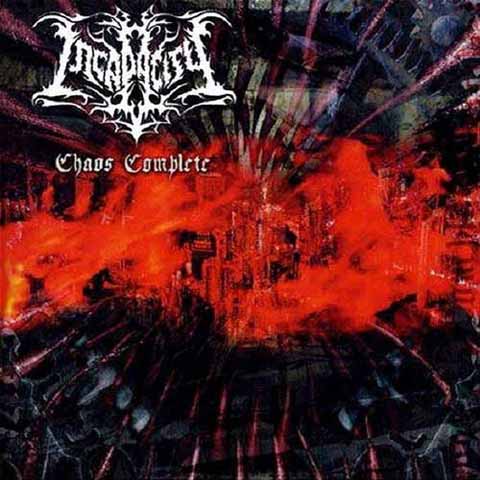 Incapacity is a somewhat of a supergroup, featuring three members of Solar Dawn (two of whom are also in Unmoored), the guitar player from Pan-Thy-Monium, and Infestdead’s vocalist Andreas Axelsson (who was also a long time Edge of Sanity member). How they got their start is somewhat strange. The boss of Cold Records got in contanct with Solar Dawn guitarist Anders Edlund, and asked him to form a death/thrash band and immediately have a record contract. Anders probably had some ideas as to which musicians he would choose, as the band released their first full length album Chaos Complete not long after forming. Yet, none of this is thoroughly interesting. What makes Incapacity enjoyable is how they adhere to early 90’s Swedish death metal, almost as if they were paying tribute to the area, not unlike Bloodbath. So how could one describe the sound of Incapacity? How about with some gratuitous comparisons. Carnage. Dismember. Entombed. Think of a thrashier version of early Edge of Sanity and you are getting pretty damn close to what Incapacity delivers. Now, allthough Chaos Complete is filled with straightforward old school death metal songs, it does have some more modern sounds to it, such as thrashyness, or a thrash/death hybrid sound. While death metal is the predominant sound with this band, I could even make the comparison that Incapacity is a deathier version of a band like Carnal Forge. This really isn’t fair, and hardely essential to compare their sound to so many others, because this album stands tall on its own. There aren’t any bad tracks on here. There aren’t. Chaos Complete just gets better until the end of the album. So In conclusion, all death metal fans should put Chaos Complete right at the top of their “should buy ver soon” list. Honest. It may not be groundbreaking music, but take my word for it and investigate this band, there are enough fresh ideas going on to keep your ear interested and your neck in headbanging mode.