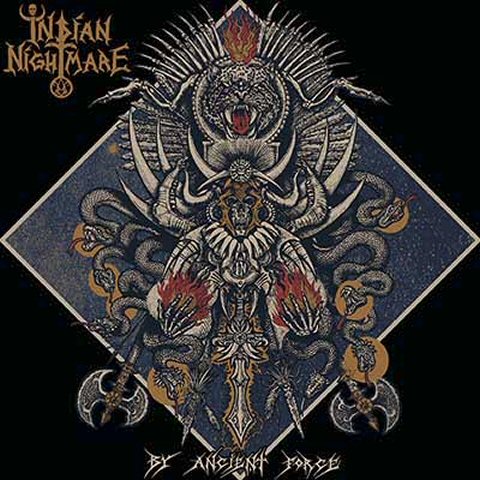 Formed in 2014 by musicians from Indonesia, Italy, Turkey, and Mexico, Indian Nightmare made a difference within the wider traditional metal scene right from the start. As self-proclaimed tribal metal punks, the quintet put up their tent in German capital Berlin and quickly established themselves with an original tack on blackened thrash metal, both aesthetically and musically. By making the members different cultural backgrounds almost palpable, their 2016 debut “Taking Back the Land” offered such a striking variation on the genre template that the youngsters were hailed as newcomers of the year by fans and media, a title that was fiercely defended at each succeeding gig the played. Therefore, expectations were high in advance of the follow-up, but “By Ancient Force” turns out to be another proverbial tomahawk to the head. The band used awesome retro equipment, the honest and warm sound of real analogue tape in this facility from the 1970s combined with the aggressive music was just perfect. Without changing the recipe of their magical potion, Indian Nightmare managed to concoct a finer-tasting yet still searing brew. The title By Ancient Force corresponds to this attitude, referring to the roots we all share. So there you have them: classic metal tropes of self-empowerment and unity, clad in a statement of intent as uncompromising as it is morally sound ,not to forget maybe more topical than ever in this day and age. With the album finished and ready for release, the band is definitely meant to stay with us for quite some time.