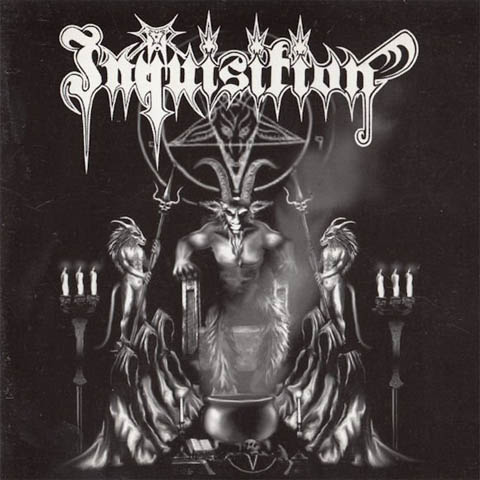 Caught halfway between the realms of thrash and black metal, most metal fans would expect to encounter Sodom, Destruction and perhaps Venom. Further towards the black metal we’d maybe find Immortal, and straying towards thrash we’d come up against Toxic Holocaust and Kreator. However, there exists a world in-between these two realms that serves as the abode of one band alone: the world of Inquisition. Comparable to – but still completely different from – Immortal, this American/Colombian duo has become the favorite band of a lot of trendy and more mainstream black metallers based upon their recent efforts. However, their best album of all time is largely overlooked, despite the fact it contains some of the best musicianship outside of the mainstream black metal scene and the most innovation on a black metal album since Strid’s self-titled EP. Invoking the Majestic Throne of Satan showcases the dirtiest and strangest guitar timbre on any album ever too. It works well, perhaps too well, but it’s a lot to digest at first; more overdriven and thick than distorted and treble based, though this is perhaps to compensate for the lack of a bass guitar. One would not expect such a tone to allow the riffage to shine through (see Revenge), yet the riffs are not only distinguishable but immensely pleasing. Some songs are based on all-out fury (such as Kill with Hate) whereas others take a more melancholic approach (Hail the King of all Heathens). Both styles are undertaken with the utmost talent and skill, and are accompanied by a plethora of drum beats. Incubus really shows his talent here, be it in the form of the violent blasts on the aforementioned third track or the spontaneous fills and double bass work on For Lucifer My Blood. Dagon’s vocals are another pleasing oddity on this album. Were they used in any other band or atop any other music, I’d smite the shit out of them. However, the low guttural voice that sounds strangely similar to what Spanish, ex-crack addicted Jango Fett might sound like works beautifully, allowing the lyrical themes to be conveyed with the perfect balance between annunciation and rasping. A near-perfect album. Nothing is left untouched here; no musical stone is left unturned. In fact, even every pebble within a 100-mile radius is utterly blasted away by the musical force that is Inquisition.

Track list:
1. Embraced By The Unholy Powers Of Death And Destruction
2. Enshrouded By Cryptic Temples Of The Cult
3. Kill With Hate
4. Rituals Of Human Sacrifice For Lord Baal
5. Invoking The Majestic Throne Of Satan
6. Hail The King Of All Heathens
7. The Realm Of Shadows Shall Forever Reign
8. For Lucifer My Blood
9. Imperial Hymn For Our Master Satan