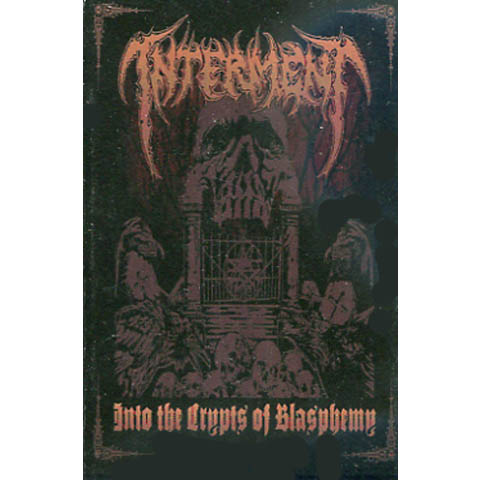 Interment -Into The Crypts Of Blasphemy MC

That obscenely familiar chainsaw guitar tone is back! The undisputed kings of putrid Death Metal Interment returns with the much anticipated and long overdue full-length effort ‘Into The Crypts Of Blasphemy’. With the intention to create a train-wreck disaster, ‘Into The Crypts Of Blasphemy’ is a non-stop bludgeoning brutality and clearly proved that Interment is indeed the masters of this genre. With 9 filth-ridden tracks spanning across a wave of 36-minute sickness, this is probably the purest form of early Stockholm-sound Death Metal that anyone will ever get. May you Rest In Festering Slime. Featuring members of Demonical and the now-defunct Centinex, Into The Crypts Of Blasphemy is not just a nostalgia trip of retro-Death but also a lesson in Swedish violence.

Track list:
1. Eternal Darkness
2. Torn From The Grave
3. Dreaming In Dead
4. Stench Of Flesh
5. Where Death Will Increase
6. Sacrificial Torment
7. Night Of The Undead
8. Morbid Death
9. The Pestilence