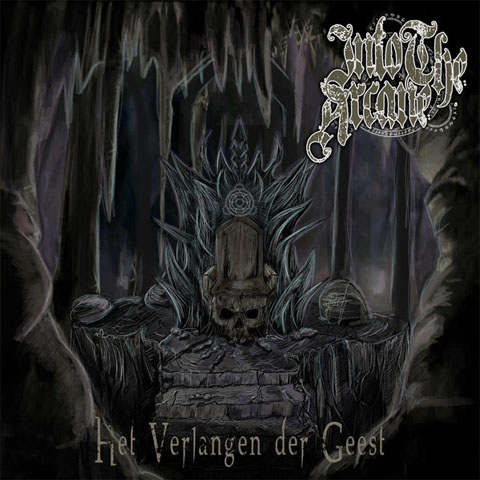 Dutch atmospheric doom metal band Into The Arcane was formed in Zeeland back in 2016 and released this 4-track ep called Het Verlangen Der Geest the year after. Into The Arcane entitle their sound as “atmospheric doom rock”, but with their first track they’re far from any slow, dragging melodies that you might expect now. Rather, it’s actual mid-tempo rock intermingled with death metal and doom influences, and the lengthy songs switch between vocal and instrumental parts. The Innocent Hunter then rather fulfills the doom part with its slower pace at the beginning and the black metal influences you can perceive, but then switches to a more fast-paced sound quite alike the first track. Nicely enough though, for variation, the track’s second part is nice, slow and atmospheric and cut out for the autumn moods we’re in now. In general, variety plays a big part in Into The Arcane’s sound, and it’s fun discerning all the different influences that went into the EP – all that while the guys still maintain a certain trademark sound, as can also be perceived on tracks number three and four, What Lies Beneath The Shroud and The Slumber Of Man. In conclusion: Into The Arcane have laid out a great EP and its the diversity of their sound, which makes Het Verlangen Der Geest very fun to listen to – so this one comes highly recommended.

Track list:
1. The Slumber Of Man
2. The Innocent Hunter
3. What Lies Beneath The Shroud
4. The Glass King