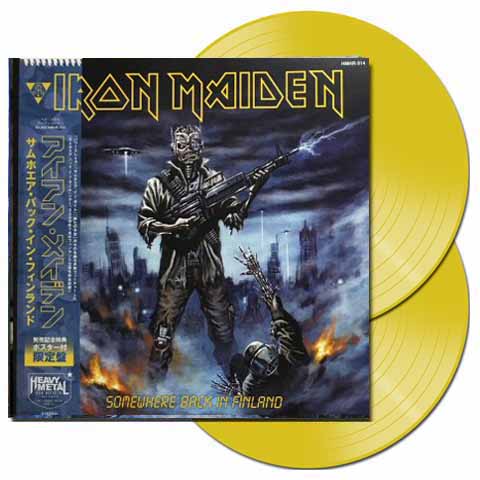 With a giant set made to look like a pyramid tomb, a setlist of songs from the 80s, old dudes in leather pants and cut-off tees, multiple costume changes, pyro, co-ordinated guitar line dances, the guitar-as-machine-gun poses, and fog machines galore anda band as tight as Maiden and a fanbase as rabid as theirs you know you will have an amazing night. May 13th saw the release of Somewhere Back In Time, a best of the 80s compilation that are followed by a best of the 80s tour. This double album was recorded at the Olympic Stadium in Helsinki, Finland on the 18th of July 2008. When the Scandinavian outdoor dates where announces EMA Telstar tour promoter Thomas Johansson gave the following comments: Everyone at EMA is very proud to be making history by giving our rock fans the biggest Nordic Rock Tour there has ever been and certainly one of the most spectacular. Maiden is so hugely popular with the Nordic peoples that we wanted to ensure that as many fans as possible got the opportunity to see this very special show next year as we expect demand for tickets to be enormous. Steve Harris added: There is a very special bond between Maiden and the Nordic people and we always feel very at home there. Perhaps Eddie really does have some Viking blood in his veins!! On the last tour we opened the show by playing our new album ‘A Matter of Life and Death’ in its 80 minute entirety. We thought we needed the challenge and it proved the right thing to do. However, it can be hard on the fans playing so much new material and we really appreciated the superb support they gave us. So now l guess it’s payback time. It’s tremendous to be able to use the profile of the Live After Death dvd to do what is effectively an 80’s show. It will be enormous fun and changing the approach to the songs we play tour by tour keeps it fresh and interesting for both the band and the fans alike. l think Powerslave was an incredible show with the Egyptian theme and look forward to seeing it all again myself. As always we look forward to spending a good amount of time in the Nordic countries and enjoying, as usual, some great nights out!