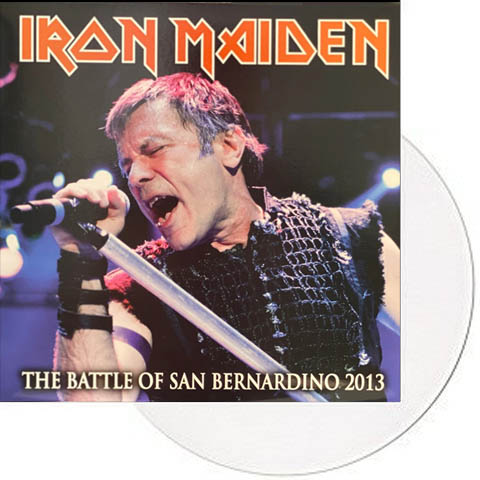 For one night, the California city of San Bernardino was the center of the metal universe as Iron Maiden, Megadeth, Anthrax, Testament and Sabaton headed up the Battle Of San Bernardino at the San Manuel Amphitheatre on the 13th of September 2013. If the night had stopp after just the four first bands it would still be a great metal show, but Iron Maiden proved why they were the show’s headliners. Opening to video of ice caps melting, the band emerged with an impressive light and stage show filled with costume changes, multiple Eddie appearances and a hits-filled performance. Moonchild opened the night, but the middle of their set featured the impressive string of The Trooper, The Number of the Beast, Phantom of the Opera, Run to the Hills, ‘Wasted Years and Seventh Son of a Seventh Son. From a theatrical standpoint, the ball of energy known as Bruce Dickinson donned his military uniform, slicked back his hair while wearing a leather jacket and bounded from platform to platform. Meanwhile, several Eddie set pieces (fortune teller, holding a beating heart and an actual live action Eddie in a soldier uniform chasing Janick Gers around the stage) added to the overall production. Iron Maiden finished out a great night of metal with an encore that included Aces High, The Evil That Men Do and Running Free.If the Battle Of San Bernardino was truly a battle, Maiden would likely reign, but in all honesty this event was a celebration of metal more than anything. This limited album features 10 tracks from that evening.

Track list:
1. Moonchild
2. Can I Play With Madness
3. The Prisoner
4. 2 Minutes To Midnight
5. Afraid To Shoot Strangers
6. The Trooper
7. The Number Of The Beast
8. Phantom Of The Opera
9. Run To The Hills
10. Wasted Years