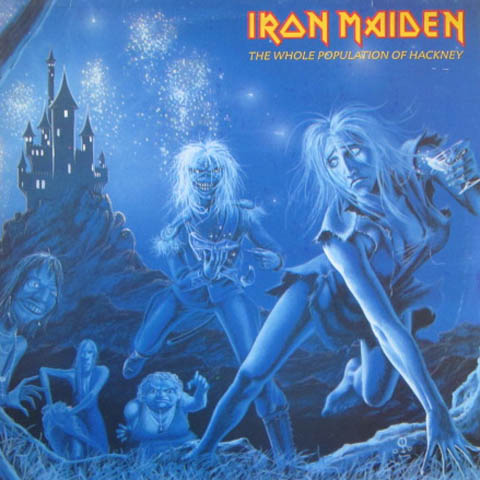 The Entire Population Of Hackney is the name used for a project featuring members of Iron Maiden, FM and Urchin that played two concerts in 1985. It is most notable for being the spark that would lead to Adrian Smith forming his ASAP project later on and ultimately his split with Iron Maiden in 1990. At the end of the 1985 World Slavery Tour, Iron Maiden took 6 months off, when Nicko McBrain’s frustration of not playing after winding down from an extensive Maiden tour and looking at a six month break, drove him to rent a rehearsal studio and invite Adrian Smith along to jam. The two invited more friends including: Dave Colwell from FM and later ASAP (the one who wrote Reach Out), Andy Barnett from FM, Marshall Fury, ASAP and Urchin as well as Martin Connoly from Marshall Fury, a friend of McBrain’s who also played in Marshall Fury. Both Colwell and Barnett helped write That Girl during this project and it was later used with FM. McBrain arranged two gigs one under the name The Entire Population Of Hackney and the other under the name The Sherman Tankers. The audience recording called The Entire Population of Hackney and/or The Whole Population Of Hackney was taken from the first show; Bruce Dickinson, Dave Murray and Steve Harris joined the band on stage only for the encores. Their set includes songs from all the members and some covers from Bob Seger and ZZ Top. The result of this short break from Iron Maiden was that three of the songs featured in the setlist would be later used on two Iron Maiden singles. Reach Out featured on Wasted Years and Juanita and That Girl featured on Stranger in a Strange Land. This recording features the complete first show the band did at the Marquee Club in London, England on the 19th of December 1985. The line up on this concert were Adrian Smith – lead vocals (tracks 1-11), lead and rhythm guitars (tracks 1-15) Bruce Dickinson – lead vocals (tracks 13-15) Andy Barnett – lead and rhythm guitars, backing vocals (tracks 1-11) Dave Colwell – lead and rhythm guitars, backing vocals (tracks 1-11) Dave Murray – lead and rhythm guitars (tracks 12-15) Martin Connoly – bass (tracks 1-11) Steve Harris – bass (tracks 12-15) Nicko McBrain – drums (tracks 1-15) Iron Maiden (tracks 16-17)