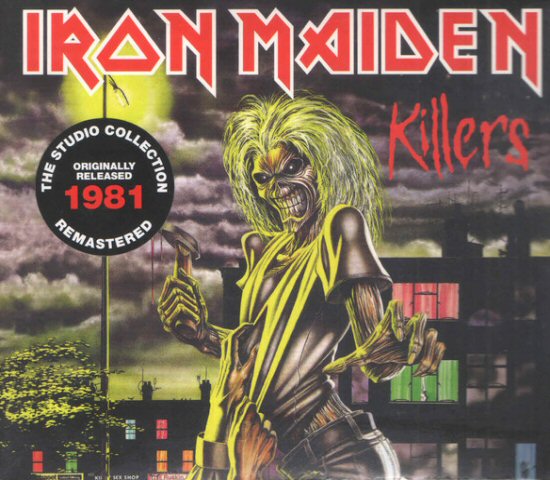 No sticker on cover and cover is vg+

Iron Maiden’s sophomore effort, 1981’s Killers, proved to be a more focused and developed affair than its predecessor. Contributing factors included the first appearance by new guitarist Adrian Smith, who helped develop Maiden’s signature twin-guitar harmonies with original member Dave Murray, plus respected metal producer Martin “Deep Purple” Birch manning the controls for the first time (his first of ten albums with the band). Killers contains a much livelier sound than the debut, while bassist Steve Harris again played a prominent role in the songwriting, penning ten of the album’s 11 tracks, while co-writing another. Chock full of classics, Killers is one consistent highlight — the homicidal tales of “Murders in the Rue Morgue” and the title track, the crushing instrumental “Genghis Khan,” as well as such forgotten first-rate rockers as “Innocent Exile,” “Purgatory,” “Twilight Zone,” and “Drifter.” Inexplicably, the album’s two best tracks — the shout-along anthem “Wrathchild” and the melodic “Prodigal Son” — were never issued as singles. Another hit album back home in England, Killers also gave the quintet their first taste of U.S. chart success, spurred on by their first stateside tour. Killers is another bona fide Maiden classic, but would also prove to be vocalist Paul Di’Anno’s last with the group.