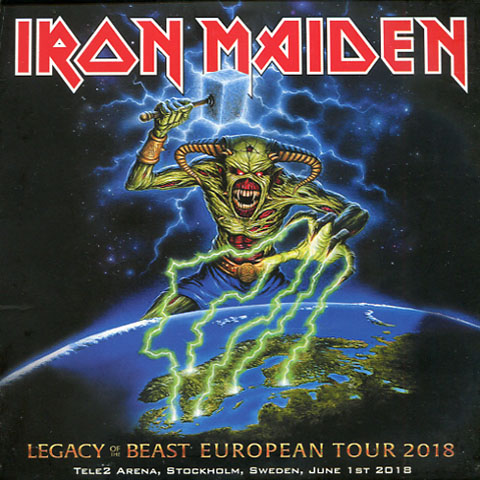 Tele 2 Arena, Stockholm on the 1st of June 2018, Dickinson is on mind-blowing vocal form when the band visits Sweden during their Legacy Of The Beast tour. The band has also brought along one of the best stage productions they have used in a long time. Big money has been spent and its obvious already from the start when the band opens with “Aces High” under a huge model aircraft from World War II and its not just about visuals as the sound is crystal clear, impressive to say at least. The setlist offers a clear focus on the 1980s favourites mixed with some more recent material. The first half of the set is very theatrical while the second half are taken over by the sheer power and energy. After the opening track comes Where Eagles Dare sending shivers down the spine and makes your hair stand up on your body. Not only is this a track few have experienced live but its also perfectly performed live to a backdrop showing a downed cable car and a fortress on a mountain. The show lingers on and Dickinson has a sword fight with Eddie during The Trooper before the stage turns into a cathedral and Maiden pulls another rabbit out of the hat; Revelations. More rarities follows; For The Greater Good Of God and Sign Of The Cross from 1995’s The X Factor. It’s been almost eighteen years since the last time they played it, and the drama of Bruce’s act and cross-wielding along with a very nice pyro display finally brings the track into its proper place. In the dramatic build-up in the middle of the song, when Nicko drives the band along in a less-than-straight-ahead time signature, the bottom suddenly fell out of the sound. It looks llike the bass drum pedal broke. Bassist Steve Harris kept going with a grim attitude and just before they would have had to stop and restart … the bass drum came back and Maiden makes it back. More surprises follows when a man with wings ascended from behind the drums. Incomprehensibly avoided since 1986, that’s 32 years ago, Maiden’s biggest American single finally returned. And how. With a fat groove and an ecstatic audience, and Bruce lights up a flamethrower where he gives Flight Of Icarus a dramatic end. From here on out the set was a tad too much on the safe side. Fear Of The Dark had Dickinson singing much closer to the original version than he has done in ages, while wearing a mask and carrying a green lantern. Nice touch, as it gave the track more of a chilling graveyard atmosphere than it has ever had. A pyro-heavy The Number Of The Beast then brought things into properly hellish territory before the band’s signature track ended the main set in fine style. The triple encore that Maiden performed was solid, but not adventurous: The Evil That Men Do, Hallowed Be Thy Name and Run To The Hills. Dickinson ends the concert on the same peak of performance as he started it. So overall verdict is nothing but top scores. An impressive stage production, great sound and a few tracks that count as rarities. You cant ask for more definitely one of the best Maiden tours ever. This double album also includes 8 bonus tracks from Stockholm from the Ed Hunter Tour of 2003.