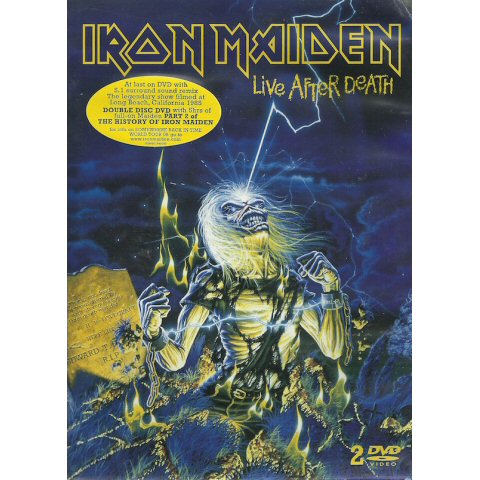 Iron Maiden’s World Slavery Tour was one of the longest and most extensive tours ever undertaken by a rock band. Lasting from August 9, 1984, to July 5, 1985, and visiting such countries as Poland, Austria, Hungry, Yugoslavia, Italy, France, Spain, Portugal, Scotland, England, Germany, Sweden, Canada, Japan, and the U.S., the show included a mammoth setup that replicated the intricate ancient Egyptian scenery of the Powerslave album cover. As a “thank you” to the hundreds of thousands of fans who packed arenas the world over, the double-cd live set Live After Death was issued in 1985. A double dvd was released in 2008 with this classic concert together with a bonus disc that features so much great stuff. This dvd is essentially a best-of of sorts, since most of their singles released up to this point are featured in all of their high-decibel glory: “Aces High,” “2 Minutes to Midnight,” “The Trooper,” “Flight of Icarus,” “The Number of the Beast,” “Run to the Hills,” and “Running Free.” Also included are such strong album tracks as “Wrathchild,” “22 Acacia Avenue,” “Children of the Damned,” “Phantom of the Opera,” “Hallowed Be Thy Name,” “Iron Maiden,” plus their two epics, “Powerslave” and “Rime of the Ancient Mariner,” making it a near-complete overview. Live After Death is easily one of heavy metal’s best tours ever.