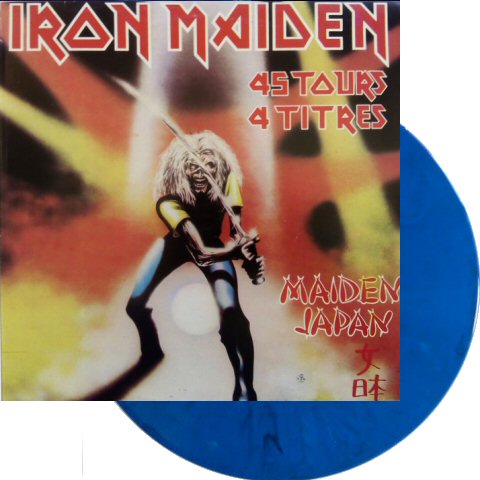 ‘Maiden Japan’ was Maidens first live single. The live material here really captures them during a great performances thundering along with a great audience response. Di’Anno is in top form here, showing off his voice quite nicely, with Adrian, Dave, and Steve tearing up their fret-boards while Clive rips apart his kit. ‘Maiden Japan’, is a pun of Deep Purple’s live album Made in Japan and it was going to be Maiden last record to feature Paul Dianno. There are two different versions of this EP; all tracks were recorded in Kosei Nenkin Hall in Nagoya on 23 May 1981. The original cover depicted the band’s mascot, Eddie, holding the decapitated head of singer Paul Di’Anno. The replacement cover was done on very short notice after Iron Maiden’s manager, Rod Smallwood, received a proof for review, and became agitated at Di’Anno’s depiction because the band was looking to replace him. Maiden Japan was released in Venezuela in 1987 with the original cover and has become a collector’s item. The US, Canada, Argentina, Australia, New Zealand, and Brazil pressings features the bonus track ‘Wrathchild’ while all other pressings features 4-tracks