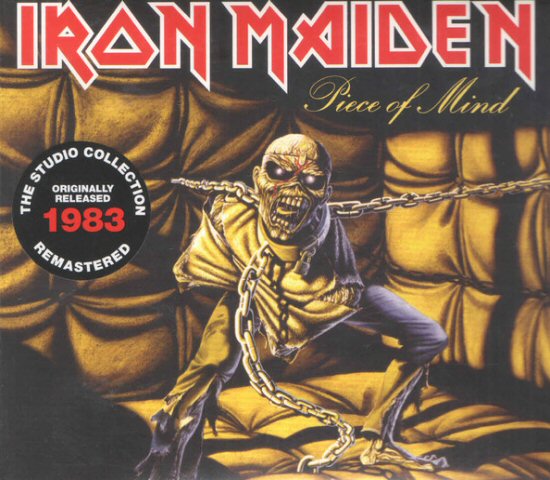 No sticker on cover and cover is vg+

By 1983’s Piece of Mind, Iron Maiden were fast becoming one of the biggest metal bands on the planet, yet with each successive album, the group lost an original member. This time it would prove to be exit time for drummer Clive Burr, who was replaced by ex-Pat Travers skinsman Nicko McBrain, resulting in what many consider to be the quintessential Iron Maiden lineup (remaining intact until 1990). While all of the expected Maiden musical trademarks are again present (Steve Harris’ galloping basslines, Bruce Dickinson’s Herculean vocals, great guitar harmonies from Dave Murray/Adrian Smith), the sound is streamlined slightly, resulting in the band’s most melodic and accessible album thus far. Piece of Mind also marked the first time that other members besides Steve Harris had a prominent say in the songwriting, resulting in such all-time metal standards as “Flight of the Icarus” and “The Trooper,” while containing several musically ambitious compositions — “To Tame a Land” (based on the classic sci-fi novel Dune by Frank Herbert), “Still Life,” and “Revelations.” But Maiden never forgot that they were a metal band, as proven by “Die With Your Boots On,” “Where Eagles Dare,” and the aforementioned “Trooper.” Although Piece of Mind was the first Maiden album to include filler (“Quest for Fire,” “Sun and Steel”), it was overall another superb release, resulting in Iron Maiden’s fourth classic in a row.