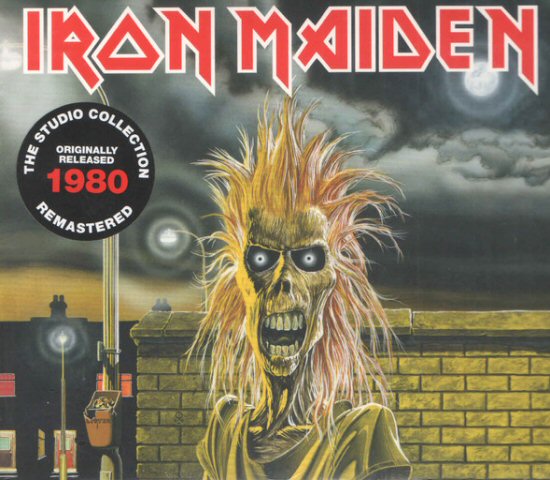 No sticker on cover

Iron Maiden’s 1980 self-titled album is certainly one of heavy metal’s all-time best debuts. Surfacing from the underground along with a host of other New Wave of British Heavy Metal bands (e.g., Def Leppard, Motörhead), Maiden’s debut proved to be incredibly influential for future metal bands — it was one of the first to merge heavy metal’s power with punk’s riffing and attitude, forging a blueprint for such genres as thrash, speed, and death metal. While the band would branch out musically on future releases, Iron Maiden contains some of their most straight-ahead compositions, such as “Prowler,” “Sanctuary,” “Charlotte the Harlot,” and the title track. The group’s more progressive direction is signaled by the seven-and-a-half-minute epic “Phantom of the Opera,” as well as by the breakneck instrumental “Transylvania.” Also featured was Maiden’s first Top 40 U.K. single, the anthemic “Running Free,” plus several calmer compositions like “Remember Tomorrow” and “Strange World,” which showed that there was more to this young band than just bashing away. Bassist/leader Steve Harris proved to be the band’s main songwriter/wordsmith early on, with lyrics that often proved thought-provoking — a sharp detour from the expected topic of sex, drugs, and rock & roll that most metal bands relied on, while vocalist Paul Di’Anno’s oft-rough vocals were also a main ingredient. Add to it inspired performances by the other members (including second guitarist Dennis Stratton’s sole album appearance with Maiden), and you have a promising, ultimately classic debut.