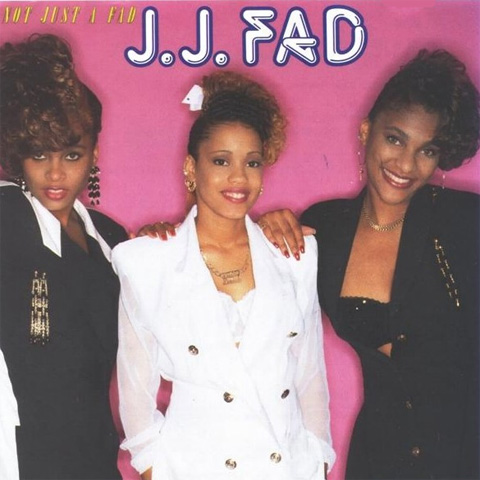 In the late ’80s, J.J. Fad was one of the pop-rap acts that hip-hop’s hardcore loved to hate — the same hardcore rappers who complained about MC Hammer, Vanilla Ice, and L’Trimm were every bit as critical of J.J. Fad. But then, the female trio wasn’t supposed to be a hardcore rap group; J.J. Fad made music for people who liked their rap laced with a lot of dance-pop and R&B. Not Just a Fad is a rather ironic title for the L.A. residents’ second and final album; by the time this CD came out in 1990, the dance-pop and urban contemporary fans who bought 1988’s Supersonic: The Album had seemingly lost interest in the threesome. J.J. Fad’s 15 minutes of fame had passed, which doesn’t mean that Not Just a Fad is terrible. Although uneven and inconsistent, this sophomore effort (which the Arabian Prince produced with N.W.A.’s DJ Yella) has its moments. The Angelinos are at their best when they find the right dance groove — “It’s Da Fad” and “We in the House,” just to give two examples, aren’t remarkable but are catchy rap/house numbers. However, J.J. Fad doesn’t fare as well when, on occasion, the trio tries to be more hardcore. “We Want It All” finds the pop-rappers delivering some tough — or rather, pseudo-tough — street talk and lambasting rival Roxanne Shante. Not surprisingly, the results are clumsy and awkward; J.J. Fad’s members were simply too girlish-sounding to be convincing as hardcore street rappers. So it’s just as well that 90 percent of this release is devoted to bubblegum pop-rap. Although Supersonic: The Album remains the group’s most famous and noteworthy album, Not Just a Fad isn’t without its pleasures — as long as you apply dance-pop or urban contemporary standards and aren’t expecting an album of pure, undiluted hip-hop.