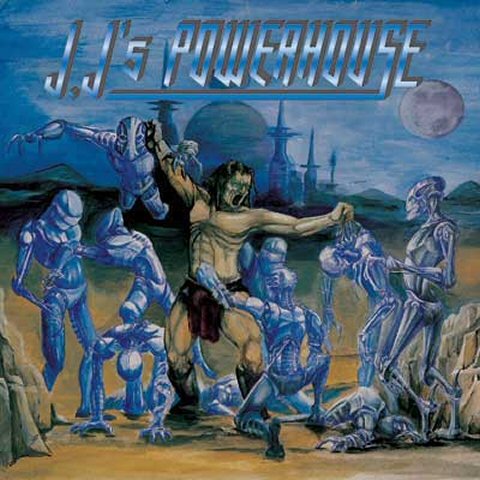 The intriguing story of JJ’s Powerhouse’s one and only single (an absolute classic of the N.W.O.B.H.M. genre) goes back as far as the tail end of 1976, when an individual known as JJ (alias Jon) Cox formed an outfit in his native town called Southport, which is situated on the North West Coast of England, between Preston and Liverpool. The name of the band was Quad. Although Quad generated a healthy following throughout the North West of England, the band was never able to secure that elusive record deal. As a consequence, JJ Cox moved to London in order to make more of an impression on the national rock scene. Prior to his move, however, he recorded a self-financed single under the name of JJ’s Powerhouse (with the help of Austin Davies, v, Dave Gormall, b, and Mick Commons, d), which was released in 1983 on the Sillysybin label. The two songs, “Running For The Line” and “Blackrods”, were recorded at Amazon Studios under the watchful eyes of Nightwing’s Gordon Rowley. Especially the A-Side won over the hearts of fans and press alike. Malc Macmillan wrote in his book “The N.W.O.B.H.M. Encyclopedia”: “The magnificient Running For The Line must be a prime contender for the accolade of ultimate N.W.O.B.H.M. classic, with its incredible, hyperspeed riffing (lend an ear to the mid-section and you’ll discover an accelerated variation on Demon’s classic Night Of The Demon riff, recorded a full decade before Impaled Nazarene got in on the act), combined with the powerful, Raven-style vocals and catchy arrangement (slightly in the vein of early Iron Maiden) making you wish that all early 80’s Metal could have sounded like this. Astonishing.”
After moving to London, JJ Cox joined a band called White Heat and JJ’s Powerhouse was history. However, Cox himself tried to make a comeback in the late 80’s, the name of his new project being Panik Attak. In 1990, Panik Attak (consisting of JJ Cox, g, v, Derek John Hodd, v, Ivan Wellington, b, v and Tim Haywood, d) released a seldom-seen 12″ on the JDI Records label. The songs were “Shout”, “I Want Your Love” and “Baby’s Left Town”. From this period stems another very odd release associated with mainman Jon Cox. He printed new labels for the remaining unsold copies of the JJ’S Powerhouse single and re-released it under the name of Panik Attak (again without the luxury of a picture sleeve). For some unknown reason, the A-Side Running For The Line received a new title, namely Formula One. This is where the story of Quad, JJ’S Powerhouse and Panik Attak ends …
Until 2006 when this album was released with the songs; Outcast, Shout It Out Loud,
The Overlorde, Rememeber, Rememeber, A Dream In Times Eye, Blackrods and Numbers. The material goes back to the original N.W.O.B.H.M. roots of the band, but was completely re-worked and re-mastered, making it a must for aficionados of the genre. Singer Oz Ozzy Davies commented on the album: “Over the years we have all kept very much in touch and had holidays together and nights of remembering the good old days, washed down by more than a few beers. Since Jon got his own studio, it has become fulfilment of a dream for us to revisit the songs of yesteryear and finally get them down onto vinyl. We have intentionally kept the songs simple and gutsy as they appeared when we did them live. I feel we have captured that live sound quite well. The album is not over produced and rather than get all the songs note perfect, we went for the one take warts and all approach. I love it and I hope you do too… it’s dedicated to all the Metal nuts that ever lived through that time and just as importantly, to the new generations of Metal lovers to come.