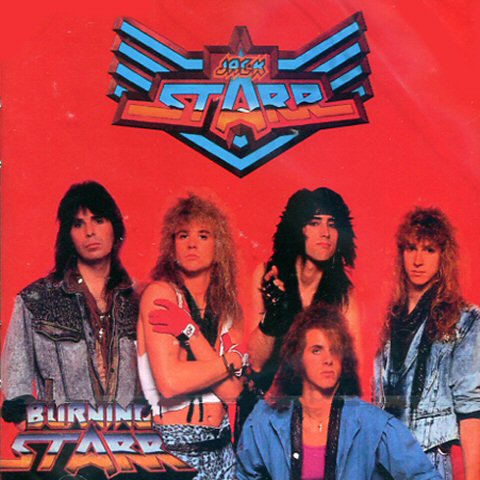 2018 press with all 13 tracks that were recorded during this session. The original vinyl only had 9 songs due to time restrictions. Limited 500 copies

Jack Starr was absolutely all over the place back in the 80’s. Just take a peek at the majority of the bands he’s been a part of and you’ll see. Its as if he was in the process of creating four to five different bands simultaneously. Virgin Steele was active and had released a few albums in the early 80’s, while Phantom Lord was starting up and had a few albums put out, the same for this band Burning Starr, the original band he started (self titled under his name now) was supposed to be the real Virgin Steele and had a few releases under its belt too, the short lived Strider would arise towards the late 80’s, and who’s Devil Childe? Yeah, I have absolutely no idea what’s going on here. He’s just bouncing off the walls with different bands left and right. Apparently a lot of Burning Starr’s material was taken from the more ill faded Phantom Lord. What I can determine is that Burning Starr was probably his second strongest band that he had forged back in the day, next to Virgin Steele. As always Jack Starr seems to make it apparently easy to get a solid line-up. With just about everything he’s been a part of, an excellent voice would be singing those soaring notes at ease. Mike Tirelli (Riot) who would go on to live a pretty successful career in metal, does a fantastic job here. Like most vocalists under Jack Starr’s radar, Tirelli is much more of a melodic singer than anything else. He’s pretty comparable to John Leone (RIP) from Starr’s Phantom Lord, or more infamously known for his role on vocals for Attacker’s “The Second Coming”. Overall he’s pretty similar to David DeFeis’s old singing as well, just maybe not as over the top and as distinguished. Jack Starr is practically a no brainer, though he doesn’t really leap beyond any boundaries, his performance is top notch with his excellent guitar work. Both the bass and drums never really stand out as their own force, but they fill those gaps and completely fortify this album. This third album was self titled but would also become known as the orange album.