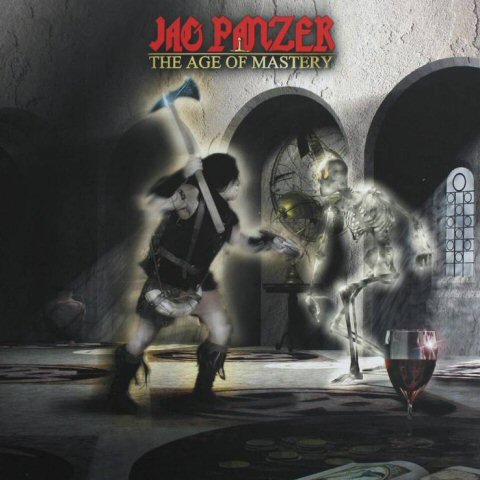 Once the ‘Tyrant’ Harry Conklin had returned to the fold, and the Colorado chain gang had produced The Fourth Judgment, they were embarking on a streak of productivity that would quickly surpass the band’s 80s output in no time flat. The Age of Mastery was the next statement in this sequence, an attempt to expand upon the Panzer revival, the unhinged leather rebels of the 80s expounding into a mature, melodic territory. Joey Tafolla had once again parted with the squad, but the band made an adequate choice in Chris Broderick (who would go on to Nevermore and Megadeth) as the cult shred legend’s replacement, so the Jag would not be at a loss in this area for the immediate future. The Age of Mastery is a bit of an anomaly, for while it presses forward with both the legacies of their 80s material and the melodic surge of the previous year’s comeback, there is a hint at a wider ambition here which will carry forward into the following album Thane to the Throne, a progressive slant that proves the band were not content with merely rehashing themselves, despite their newfound motivations and career second wind. That’s not to say the execution here is well enough rounded, and the mix of such materials with a ‘Lustfull and Free’, or ‘Iron Eagle’ creates a jilted experience that feels more like a pair of diverse EPs tacked together than a pure, consistent effort, but thankfully there is just enough here to enthral and immerse a listener into the broader field of ideas. ‘Iron Eagle’ is the gateway, a roll of melodic muting given graceful airs through the insertion of early, taut leads that hook off the verse and offer ballast to Conklin’s efficient if average lyrical patterns, similar to the material on the previous album. There are some nice touches of backing, male choral vocals, and I love the percussion ringing off against the lead sequence, though the solo itself feels like little more than indulgence that eludes the memory. ‘Lustfull and Free’ feels like the band returning to the virile and infectious explosion of 1984’s Ample Destruction, though polished and given an elevated sense of atmosphere. ‘Sworn to Silence’ fords into darker climes, essentially a mix of melodic heavy and thrash metal with a great chorus and charging axes, while ‘Twilight Years’ bounces is a personal favorite here, a bouncing juggernaut of melodic mutes that erupts into a memorable, fluid chorus and a fairly progressive/power bridge. After this potent initial outburst, featuring some of the highlights, the record levels off somewhat and becomes a more muted palette of color, competent and yet somewhat less inspiring. For instance, the bridge and lead of the band’s cover of ‘False Messiah’ (from ex-Virgin Steele stringer Jack Starr’s solo effort Out of the Darkness) are well crafted, but the surrounding environs are less notable; ‘The Age of Mastery’ pumps along at its mid pace, but its not until the twisting, serpentine melodies of ‘Displacement’ that we get another rouser with a progressive presence that hints at the myriad possibilities this band might explore as they proceed into their mid life. ‘Viper’ is a soon forgotten rocker, and ‘Take This Pain Away’ fails to truly function as a soaring power ballad. Conklin seems shaky in the verses as he hits a mid range, though its interesting to hear him paired with a violin. We next have ‘Chain of Command’, a track that would naturally have appeared on Panzer’s yet unreleased sophomore studio effort. It’s an acceptable piece of melodic power metal which once again utilizes some strings, but not ultimately memorable. As compensation, ‘Burning Heart’ is a great, brazen spike of inspiration driven deep into the listener’s icy chest, all crystal melodies and excellent presence of John Tetley’s bass lines, with Conklin transforming into some ethereal, female entity in the chorus. The curtains of The Age of Mastery are drawn with ‘The Moors’, a pretty ambitious piece with choral arrangements, strings and an epic composition which is about half on, half off, or better yet a glimpse into the crystal ball of the band’s next full-length. There are enough ideas present on this fourth album that the long-term Jag Panzer fan must surely listen back with some fondness, at least for a handful of the tracks, but it’s true that the album just feels off as far as its presentation and consistency. What is perhaps most important about The Age of Mastery is that it shows a band about to embark on a conceptual phase of their career which elevates them from mere power/heavy metal to something more substantial and interesting