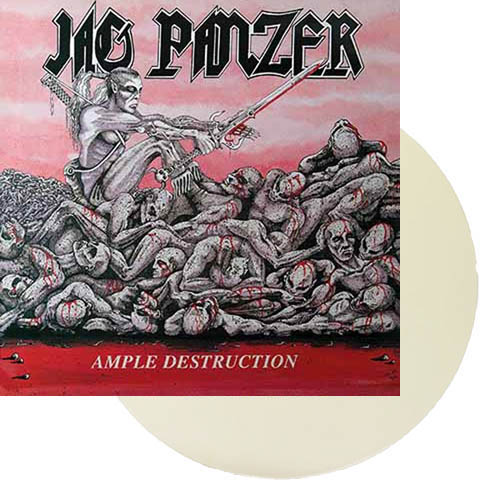 2020 release with the Metalcore artwork that was originally used for the UK cd version. White vinyl with insert, 2 posters and a promo photo card. Limited 150 copies

The classic and definitely essential full-length debut album from proto-thrash /true heavy metal heroes Jag Panzer! An original Azra pressing of Ample Destruction (also known as License To Kill) is one of the ‘Holy Grails’ for true heavy metal collectors. The album surely rates as one of the Top 10 US Metal album of all time. Comparing Ample Destruction with Tyrants, it quickly becomes evident that the sound on the album was far superior to that of the debut EP. Mark Briody explains: Well, the budget for Ample Destruction was way bigger than what John and I had spent on the EP. We were also spending more time on Ample Destruction in the studio as far as recording and mixing was concerned. The song writing on the album was also more mature in a lot of ways compared to that on the EP. There were some great melodies on there for sure. According to Mark, however, the pool of songs to choose from was not as big as one could have imagined: Basically just the amount of songs that were on Ample Destruction, songs we were already working on while we were living in California and before Joey was in the band. I am talking of numbers such as ‘License To Kill’, ‘Symphony Of Terror’ and ‘Generally Hostile’. And once Joey got in the band I remember at the house we were living at in California, we were working on songs like ‘Warfare’ and ‘Harder Than Steel’. Everything else was written at John’s parents house back in Colorado. All songs were brand new compositions except ‘The Crucifix’ which we had been working on before with the demos. This 2019 re-issue comes with one bonus track, “Black Sunday, which was written by Harry ‘The Tyrant’ Conklin. Mark comments: “Harry had written ‘Black Sunday’ while we were still living in California. There was not enough room on the record to physically put that song on the original issue of Ample Destruction. So we kept it off until we thought we could maybe use it as a B-side or something.