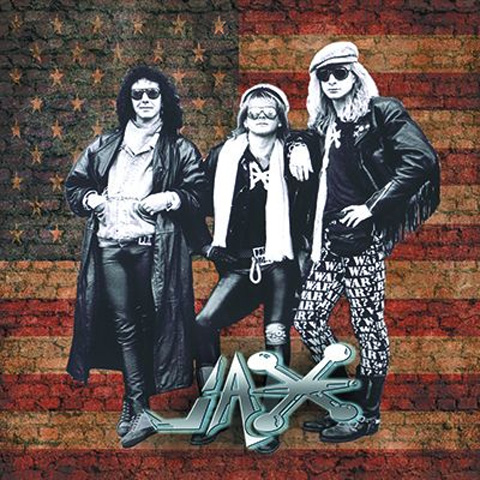 Jax was formed in New York City 1987 by Thom Jack. The band recorded a six song demo in a Soho studio in New York City that Thom had helped to build in exchange for free studio time. It was engineered by Danny Caccavo (Kiss), with keyboards by Bob Kinkel (Trans Siberian Orchestra). In January of 1988, Thom took the songs to the annual international music industry conference at Midem, Cannes, in the south of France. There was immediate interest from many labels, and Jax eventually signed with a very successful music production company out of Frankfurt, Germany, and recorded their first album there at Hotline Studios (White Lion), with Erwin Musper producing (Def Leppard, Bon Jovi). Jax was now a power trio and they were now signed up by CBS Records in Germany for a worldwide release, and a month of mixing was planned at Wisseloord studios in Holland, as well as a major marketing campaign and international tour. Unfortunately, when CBS Usa realized that a New York band had been signed out from under them to the German branch, political infighting within the company began, and they killed the deal. Around this time many New York bands that had been ignored in America by the US labels, like Stray Cats, Twisted Sister, and White Lion, had become so successful outside of the USA that they made the A&R people who passed on them look rather foolish, and this was probably why the deal got crushed. Jax were managed for a time in America by Jay Jay French (Twisted Sister), and a three year long process started and when the band finally got a deal that looked like a release was secured popular music had changed, and Jax was released with absolutely no support or marketing on a little indie label in Germany, Austria and Switzerland only. The record still garnered a tremendous amount of international press and fans, and became a much sought after collectors item, but on the radio, the time had passed for their type of music. Had they been released as planned in early 1989, with the full support and marketing promised and agreed on, it might well have been a different story. The fact that after twenty five years there is still international demand is quite telling, and what might have happened had the record labels put the music first, above their own petty interests, no one will ever know.