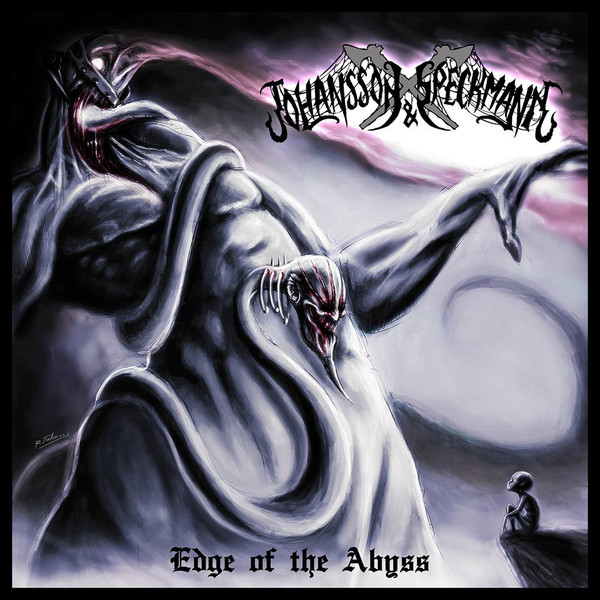 Johansson And Speckmann -Edge Of The Abyss cd

Pure old school death metal project featuring underground death metal master Rogga Johansson on guitars and bass (Paganizer, Ribspreader, The Grotesquery) and true extreme metal legend Paul Speckmann on vocals (Master, Death Strike, Abomination). Wasting no time in between recording for each members other groups, the two members have quickly come together to offer what might be the crowning opus for each member in the calendar year of 2016. This time joined by monster drummer Brynjar Helgetun and also presenting lead guitarist Kjetil Lynghaug. As was prominently featured on the last album, this one here comes from the utterly dominating old-school attack that manages to feature the qualities of their two bands together in a fine mix. This one goes from the typical churning, swirling riff-patterns and the frenzied blasting tempos featured here that are mixed alongside the furious simplistic thrashing sections that create a palpable surge of energy and intensity throughout here while allowing for some strong agonized sprawling that gives it a strong touch of the old-school throughout here. When it gets to the mid-tempo rhythms become far more prominent and the album becomes far more straightforward and simplistic which is what drops this in favor of these plodding efforts which play far more in line with what occurs in both members’ other projects. That variety here is quite prominent within the confines of the album with it making a concerted effort to appeal to both fan-bases quite readily without much difficulty and the release makes for a great time for fans of both members by featuring the kind of work mostly familiar to each other. This tends to make the album come off like simply one of them being a guest on the others’ work which is the sign of a true collaboration between them yet doesn’t really pack any kind of surprises overall by simply providing more of the same here. Though it really lacks much in the way of creativity or really any surprises of any kind, the fact that this one really seems honest about working to the strengths of both members here who come from a similar background that this is a no-doubt interest to fans of both members as well as any fanatic of old-school death metal.

Track listing:
1. Perpetuate The Lie
2. You’ve Stepped On A Dime
3. Misanthropy
4. Turn It Around
5. The Last Witness Is Barely Alive
6. The One They All Despised
7. The Edge Of The Abyss
8. A Concept
9. Already In Disguise